Help the Colony (as a hero, succeeded).

He was voiced by Christopher Walken, who also played Max Zorin in A View to a Kill, Bradford Whitewood Sr. in At Close Range, Frank White in King of New York, Max Shreck in Batman Returns, Vincenzo Coccotti in True Romance, Gabriel in The Prophecy series, Mr. Smith in Nick of Time, the Headless Horseman in Sleepy Hollow, Reed Thimple in The Country Bears, Salvatore Maggio in Kangaroo Jack, Cornelius Hatcher in The Rundown and King Louie in the 2016 The Jungle Book live-action remake.

Colonel Cutter started out as General Mandible's henchman and aided him in his plan to kill the Queen Ant along with the worker ants in their colony by flooding their hill. This was because Mandible wished to start anew and have a strong colony with his future wife Princess Bala. Cutter was uneasy with Mandible's plan to send an army of soldier ants loyal to the Queen on a mission to attack a termite colony, which would destroy them all.

Cutter accompanies Mandible to get permission from the Queen to launch an attack on the termites. Cutter also finds space in Mandible's schedule for him to have a short conversation with Bala, before they leave. Afterwards, Bala is supposedly kidnapped by the army's lone survivor Z (a worker ant that swapped places with his soldier ant friend Weaver in order to see Bala again, after meeting her at a bar).

After interrogating Weaver (via having his soldiers punching him and torturing his crush Azteca) on the whereabouts of Bala and Z, Mandible sent Cutter to Insectopia to retrieve Bala and kill Z. However when Cutter arrives at Insectopia, he finds Bala alone and is told by her that Z is dead (where in fact he is alive and that Bala only said he was dead to protect him).

Cutter takes Bala back to Mandible who reveals to her his plan to flood the hill, before locking her in his office in order to stop her from interfering with his plan and to protect her from the flood as he still intends to marry her and make her the Queen of his new colony.

On the day of the intended flooding, Cutter still remains reluctant with Mandible's plan as the soldier ants seal up the exits as the workers prepare to open Mandible's Mega Tunnel (which opens at a puddle that would cause the flood). After Z (who returned to help Bala), Bala, Weaver, Azteca, the Queen and the other workers escape the flood, Mandible tries to kill Z, only for Cutter to turn against him and help Z as he grows sick of Mandible's racial supremacy. Angered by this betrayal, Mandible charges at Cutter, only for Z to knock Cutter out of the way and, along with Mandible, falls back into the flooded hill.

Whilst Mandible dies after falling onto a root, Cutter, with help from the other ants, helps Z back up. Sometime after this, Cutter becomes the new general of the soldier ants. 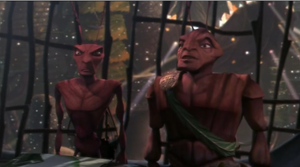 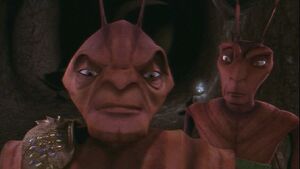 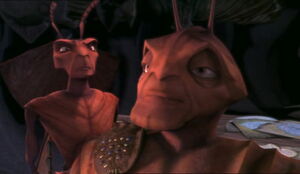 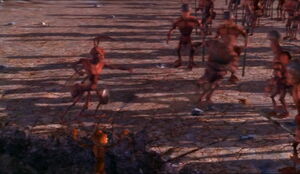