Launching fireballs from the panther on his head

Colonel Dasmader (in Japanese: ダスマダー大佐) is a major antagonist in Kamen Rider Black RX. He is an inspector in the Crisis Empire serving under Grand Lord Crisis. He is eventually revealed to be a host for Crisis himself.

He was portrayed by Tetsuya Matsui.

Crisis dispatched him to the Crisis Fortress to get the Earth Invasion Party back on track. He, Gatezawn and Bosgun later attempt to kill Gedorian to appease Crisis' anger. However, Dasmader was stabbed in the back by General Jark to save Maribaron from being killed by him. RX later fought him and threw his Revolcane into his body. Despite exploding, Dasmader managed to survive. Maribaron eventually discovers in the penultimate episode that he is actually a secondary body for their boss. When Black RX boards the Crisis Fortress, he fights RX when he refuses Crisis' offer. RX succeeds in killing him, with Crisis then revealing himself after the inspector's demise. 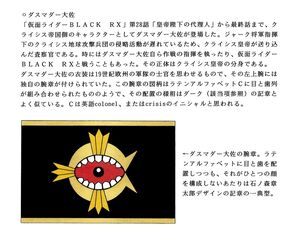 Dasmader crest (Written in Japanese)
Add a photo to this gallery

Retrieved from "https://villains.fandom.com/wiki/Colonel_Dasmader?oldid=3534861"
Community content is available under CC-BY-SA unless otherwise noted.