Proficient in ranged weaponry and hand to hand combat.

To steal all of Paris' artwork for the Nazis.

Nazi Arrogant Totalitarian
Colonel Frankenheimer was a villain appearing in The Looney Tunes Show. He appeared in the episode Eligible Bachelors where he was voiced by Dee Bradley Baker.

After Granny wins a date with Daffy Duck in a charity auction, she makes him clean her attic. While the two are doing it, they find a World War II-era photograph of Granny as a foreign agent for the Allies. Granny proceeds to tell Daffy about the time she saved all of France's artwork from the Nazis. Her principal antagonist throughout the flashback portions of the episode is the single-minded, brutish Colonel Frankenheimer, an officer serving in the Wehrmacht Heer (Army) of Nazi Germany. Frankenheimer is first seen on top of the Louvre supervising the loading of several paintings onto his zeppelin and he laughs evilly, and when some of his men laugh, too, he hits them until they stop.

Granny snaps photos of the operation, catching Frankenheimer's attention and causing him to order his men to capture her. She flees to the Eiffel Tower, where she gives the film from her camera to Tweety, but as he flies away, Frankenheimer's zeppelin appears overhead and he uses it to lift up the entire Eiffel Tower, proclaiming it France's greatest work of art. As the Eiffel Tower is lifted, Granny falls off, but she is rescued by Tweety, who flies her around. Frankenheimer, spotting them, orders his pilot to shoot them, but the pilot misses and hits part of the zeppelin frame accidentally. Enraged, Frankenheimer takes the pilot's gun and then throws him out to his death, and tries shooting Granny and Tweety himself, but can't get a bead on them before they fly up and land on top of the zeppelin.

Climbing up to confront them, Frankenheimer is unable to shoot Granny, who knocks the gun from his hands. She demanded he land the zeppelin, but he refused, sneering that he didn't take orders from women, prompting the two to engage in a fistfight. Frankenheimer won, knocking Granny off the side of the aircraft, but she clung by her fingers. As Frankenheimer tried to kick her off, Tweety appeared, tying a rope to the Nazi colonel's ankle and punching him. He fell off the side, but his descent was halted by the rope around his ankle and he banged against the hull, knocking himself silly.

Later, when the Allies liberated Paris, a very dejected-looking Frankenheimer was turned over to the French authorities and taken away to prison.. 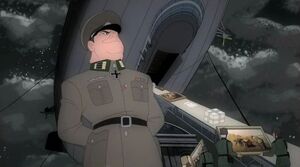 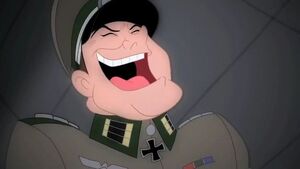 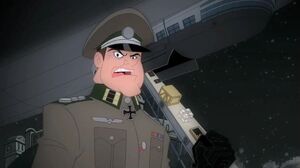 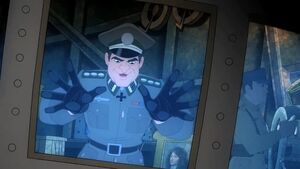 Looking out at the Eiffel Tower. 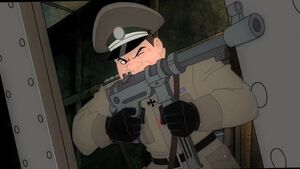 Aiming a gun at Granny. 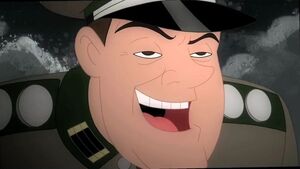 "I don't take orders from a woman!" 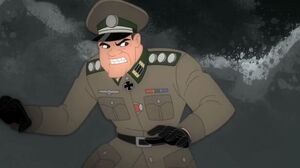 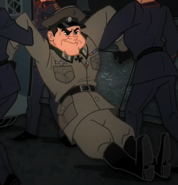