Bullying people.
Hating everyone in general.

Get revenge on Robert Freeman by killing him (first goal; failed).

Spread ignorance and chaos across the Afro-American community (after killing Robert Freeman; failed).

Colonel H. Stinkmeaner, simply known by all as Stinkmeaner is the secondary antagonist in The Boondocks series. He is one of the biggest antagonists on the show and the archenemy of Robert Freeman.

He was voiced by Cedric Yarbrough, who also played the voice of the Freeman family's mild-mannered lawyer neighbor, Tom DuBois in the same series, Officer X in The Penguins of Madagascar and Gerald Fitzgerald in Paradise P.D.

Little is known about Stinkmeaner's early life, such as when he was born or who his parents were, but even at a young age he held a hatred for all things good and beautiful, like sunsets and rainbows. By the time he was 15 years old, Stinkmeaner had developed cancer that took away his eyesight and was told he'd have no less than 3 years left to live.

Not caring too much about losing his sight, he decided to spend what he believed to be his last years on Earth being as terrible as he could be to as many people as possible. Somehow however, possibly out of pure spite and hatred, he lived far past his expiration date up until that is until he met Robert Freeman.

Stinkmeaner died in a street fight with Robert Freeman during an "N***a Moment". In every episode Stinkmeaner is involved, even after his death, Robert openly says that he doesn't regret killing Stinkmeaner and that he was a psycho who deserved to die. It's only staring death in the face at the hands of "Stinkmeaner 3: The Hateocracy" that he admits that his death was a mistake.

He returns as a vengeful spirit in Stinkmeaner Strikes Back in which, after some martial arts training in Hell, he is sent by Satan back to Earth to exact his revenge. He possesses the body of Tom Dubois and makes him do crazy things at the most inappropriate times; such as kicking an annoying man in the chest, swearing out loud in a courtroom, and having sex with Tom's wife Sarah.

Eventually, he makes his way to the Freeman house and attacks Robert first by trying to break down the bathroom door with an axe while he's posting videos of himself on the internet on the toilet, Huey and Riley come to his aid and the Freeman family fight him, he beats them all effortlessly but is eventually subdued when Robert ties up his legs with his belt and Riley knocks him out with Robert's (very expensive) knickknacks.

He appears a third time as a ghost narrating the story of a crew of elderly self-hating racist bigots (Lord Rufus Crabmiser, Lady Esmeralda Gripenasty, and Mr. George Pissedofferson) of which he was the leader of. At first, Stinkmeaner and his crew hated each other right away, but then they caused a series of problems for the other nursing home residents to make their lives a living hell, so eventually, they were kicked out, and split up, thereafter.

When they heard of Stinkmeaner's death they came to Woodcrest to kill Robert Freeman and his family; Gripenasty and Pissedofferson went after Huey and Riley while Crabmiser went after Robert, after a long fight the three barely escape with their lives so they attempt to hire a bodyguard. First, they try Ed Wuncler III, but he's too reckless and Huey suggests they hire Bushido Brown. Brown proves to be too high maintenance and they take forever to make their move again, but they appear seconds after Robert has just fired Brown, prompting him to immediately rehire him and they fight.

He does well defeating Gripenasty and Pissedofferson but Crabmiser decapitates him with his flying guillotine, and afterward they reveal that they never really cared for Stinkmeaner in the first place and would've attacked them anyway regardless of it. Hearing the commotion, the police arrive and arrest the group for assault and murder, and Stinkmeaner remarks that being in Hell is better than being in jail.

As revealed in Season 4 and prior to his death, Stinkmeaner arranged for a clone to be produced using samples from his body. This clone would then be sent by posthumous orders to ruin Robert Freeman's life.

As expected, the clone attacks Robert in the parking lot, sparking another confrontation and humiliating Robert in front of the Internet-watching world when many spectators recorded the fight-turned-beatdown on their phones. Determined to resurrect his sense of pride, Robert readies to accept Stinkmeaner's challenge of a rematch, but initially backs down at Huey's insistence, so as to end the problem.

While Robert manages to get Stinkmeaner arrested, Ed Wuncler, Sr. bails the old psychopath out in order to arrange an official fight to go down for business. Robert gradually becomes much like Stinkmeaner himself and confronts Stinkmeaner in the ring, brutally beating him down. Although Robert did not kill the clone as he had the original, Stinkmeaner took advantage of Robert's act of mercy to antagonize him further, harassing him just outside his house and then walking away.

Stinkmeaner is a terrible and unpleasant man to everyone he meets and enjoys the pain and anguish of other people, going so far as to dedicate his life to making others miserable. He lived a long horrible life, as when he dies he is sent to hell, and is actually happy there, more than he has been during his life. According to Huey Freeman, Stinkmeaner has always been this way his entire life, even when he was a child.

He is very derogatory, opprobrious, and vituperative, as he uses the phrase "bitch ass n***a", or "n***a", in almost every sentence he uses and says it to everyone regardless of their race. He even called the Devil himself a "bitch ass n***a". 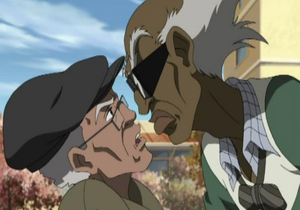 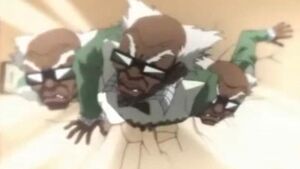 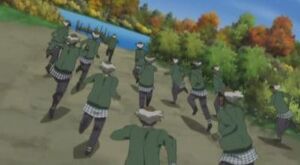 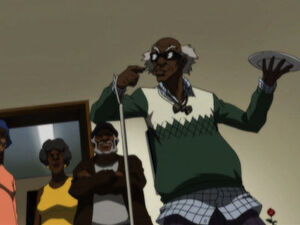 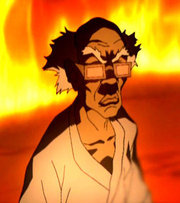 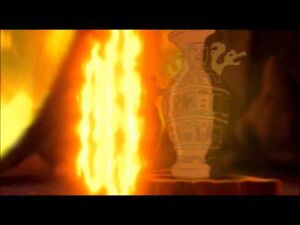 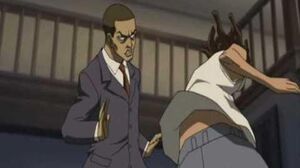 The Freeman Family Vs Stinkmeaner 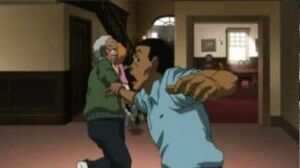 The Boondocks The Stinkmeaner Nightmare