Colonel Heller is the main antagonist of Disney's 1971 film Bedknobs and Broomsticks. He was a Nazi officer who led a platoon into invading the coast of England in 1940.

He was portrayed by the late John Ericson.

Being an officer in the Wehrmacht Heer (Nazi Germany's regular armed forces), Heller was assigned by the Fuhrer to lay siege in England. Following the defeats of King Leonidas, the Bookman and Swinburne, a witch named Eglantine Price spotted Heller and his men being dropped off by a submarine off the coast of England near her house after killing a Home Guard soldier stationed there. She locked the door and tried to contact the Home Guard, but two of Heller's soldiers quickly broke in and take her and the children (Carrie, Charles and Paul Rawlins) hostage. As Heller uses Ms. Price's house as his own base of operations, he explains to Price that their mission was to cause mischief, mayhem and sabotage to prove to the British government that Germany could land troops whenever and wherever they wished, in an effort to bully them into surrendering. An outraged Price attempts to turn Heller into a rabbit (just like she briefly did to Leonidas), but she forgot the words of the spell; even when Charles attempts to go to Price's workroom to fetch her notebook containing the spell, one of Heller's soldiers forbids him to do so. An annoyed Heller then orders Price and the children to be taken away and locked up in the armory museum.

Unbeknownst to Heller, Price's former teacher Emelius Browne, who was waiting for a train to London, infiltrates Price's house after spotting two of Heller's soldiers cutting off the phone wires before punching them out. Browne also uses the same spell to temporarily transform himself into a rabbit before fleeing to the armory museum to rescue Price and the kids.

With the encouragement from Browne, Price uses the Substitutiary Locomotion spell to bring all the suits of armor in the museum to life, and they set off to attack the Germans. Upon seeing this approaching army through his binoculars, Heller couldn't believe his eyes; even when his right-hand lieutenant spotted Price arriving on a flying broom to lead the attack and deduced that she is a witch, Heller stubbornly refuses to believe that witches exist. Heller ordered his men to fire at the approaching knights, but the gunfire did no good, and after a comical battle, the Nazi soldiers became terrified by the sentient knight armors attacking them.

Witnessing his soldiers fleeing, an angry Heller demanded that they stay and fight back, but takes it back when being confronted by a huge empty suit of armor wielding a gigantic axe. Realizing now that he cannot stop Price and the knights from defending England, a horrified Heller fled with his men, but not before blowing up Price's house with dynamite in retaliation, destroying all her equipment and spells. The explosion knocks Price off her broom which in turn stops the magic, causing all the armors to become lifeless and fall down.

Despite the armors becoming lifeless once again, their battle was enough to attract the Home Guard (led by Major General Brian Teagle) to spot Heller and his soldiers boarding their boats at the coast. With that in mind, Teagle gets his soldiers to fire several warning shots to drive Heller and his soldiers back to their submarine and into the sea so that they can never set foot in England again. Also, despite losing her spells, Price took great solace that she provided a small but great service in the war effort for the British (this even inspired Browne to enlist himself in the British Army).

It is unknown what happened to Heller afterwards, though it can be presumed that he would return back to Germany, where he would be reprimanded by his superiors for his failure to invade England.

Being an officer of the Nazi military, Heller was proven to be quite arrogant and wrathful in nature, as he finds the idea of bullying England into surrendering to Nazi Germany to be a simple exercise of showing the Nazis' power over them. He is also skeptical as he dismisses the idea of magic, even refusing to believing that Price is a witch despite seeing her riding on a flying broom to lead an attack against his forces.

Heller is also misogynistic is nature as one of his soldiers stated to Price that Heller thinks of a British woman to be the 'greatest nuisance' of all, prompting an annoyed Price to declare that both Heller and his soldiers should need a lesson in manners. Despite his warmongering ways, Heller was a brave man and expected the same from his subordinates as he yells at them for running away from the sentient suits of armor, only to run away himself after being confronted by an empty suit of armor wield a large axe.

For all his reckless bravery and skepticism, Heller eventually came to truly believe Ms. Price was a witch just as his sergeant had said, marking him as a man who can't ignore the evidence staring him in the face, regardless of his prior beliefs.

It should also be noted that Heller, despite his angry, mysoginist and violent temper, apparently was not purely evil like many of his peers in the German army. At least he was an extremely pragmatic man who never committed evil deeds for the sake of evil. For example, he never harmed Miss Price or the children, and when they became an obstacle to his plans, he had them locked up instead of killing them, proving to him that he was a man who believed that civilians should not be harmed in times of war. 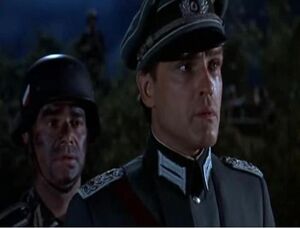 Heller and his sergeant. 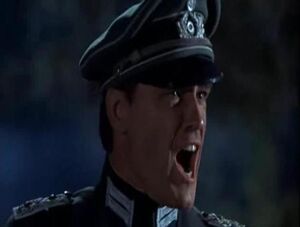 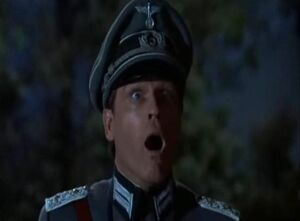 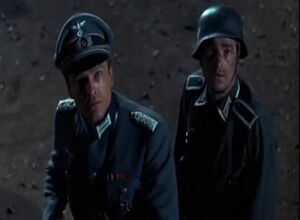 Heller looking up at Ms. Price in defeat.