Smoking cigars with his friend Senator Charles Meachum and making laughs upon the Justice System.

Kill the Archbishop of Ethiopia

Frame Bob Lee Swagger for the incident (both succeeded).
Profit from his business with Charles Meachum (failed).

Colonel Isaac Johnson is the central antagonist of the 2007 movie Shooter.

He was portrayed by Danny Glover of Lethal Weapons fame, who also played Bob Goodall in Switchback and Dean Francis in Mooz-lum.

Shortly before the events of the movie, Johnson led an operation in which forces of the US military killed an entire village in Eritrea because a pipeline was about to be build on the location and the townspeople did not want to move. It was a secret operation on behalf of Senator Charles Meachum and the US government was not informed.

Three years later at a headquarter, Bob Lee Swagger's file is shown to Johnson. He and two of his men travel to Swagger's house and try to recruit him for a mission: The CIA has information about an assassination attempt on the president during one of his speeches in either Baltimore, Washington D.C. or Philadelphia. As the shot will be taken from beyond a mile, Swagger, one of the best Snipers in the world, is supposed to scout out possible location and to "plan" the assassination, so that the CIA can foil it. Though Swagger initially refuses, Johnson manages to get Swagger on board. After visiting the locations, Swagger thinks that the assassination attempt is most likely to happen in Philadelphia. When Swagger tells Johnson about the results of his investigation, Johnson expresses his desire to catch the assassin alive for interrogation. With the reason that on the day of the assassination, Swagger would be one of the few people who would know what to look for, Johnson recruits Swagger as a spotter.

On the day of the speech, Johnson and Swagger watch the speech through the windows of an abandoned house with the CIA uses as a command central. Johnson introduces Swagger to Officer Timmons of the Philadelphia Police Department. During the speech of the president, Swagger tells Johnson that it is time to take out the assassin, only to be shot by Timmons. Swagger jumps out of a window and flees. While one of his agents angry berates Timmons for failing to kill Swagger, Johnson tells his men to find and kill Swagger.

When told that Swagger's body was not found, he dismisses the idea of Swagger being dead. He tells his men to tear up Swagger's life to find a clue on his whereabouts. Meanwhile, Swagger wants to get revenge on Johnson. He uses Sarah Fenn, the widow of his deceased partner Donnie, to meet with Agent Memphis. Sarah gives Memphis intel on Swaggers location to lure Johnson out of his hiding place. Memphis and an associate of his identify Johnson and his group as contractors with high ex-military contacts. After some time, Johnson's men find out that Nick Memphis is investigating the assassination and Johnson orders them to take him out. Memphis is saved by Swagger, who kills the kidnappers and recruits Memphis to his cause.

Eventually, Johnson's men find the connection between Swagger and Sarah, to whom he had sent flowers each year on the anniversary of Donnie's death. Johnson sends one of his men to Sarah's home, where he rapes and kidnaps Sarah. Johnson also informs Mikhaylo Sczerbiak, the real assassin, that Swagger will now come for him. When Sczerbiak says that Swagger will never find him Johnson tells him that he will be used as a bait to attract Swagger. When Swagger and Memphis invade the ranch where Sczerbiak hides, they kill all of the guards. Swagger finds Sczerbiak and interrogates him about Johnson's real name and his plans. He is told that Johnson had a lot of names, none is truer than the one before and that Johnson is run by the Senator of Montana. He also tells Swagger that the genocide in Eritrea was the reason for the death of the archbishop as well as the fact that the units that he and Donny was trying to protect back then was the one that carrying out the massacre. This fact reveals that the militia that chased the convoy were in fact people who seeks revenge on the massacre. Johnson then said his last words that Meachum's men has Sarah, before committing suicide. After Johnson's soldiers fail to kill Swagger, he meets with Charles Meachum to report his failure. When Meachum is told, he states that he is beginning to think that Johnson was the wrong man for the job. During their conversation, Meachum states that there's always someone thinking different and that this man has to be killed.

After he escapes the ranch, Swagger is called by Johnson who tries to threaten him by revealing that he has Sarah. Swagger then shows that he has recorded everything Sczerbiak told him and that he now has proof for Johnson's involvement in Eritrea. After stating that he wants to meet, he says that Senator Meachum should also be present, revealing his knowledge of the Senator's involvement. They arrange a meeting on the peak of a mountain. Though Johnson has soldiers with sniper rifles waiting for Swaggers arrival, Swagger tricks them with the help of Memphis and shoots them all. Swagger then comes out of the Snow and joins Memphis, Meachum and Johnson. Memphis searches the two men and takes their weapons and throws them into the snow. Swagger then takes out the recording about Eritrea and burns it, as as long as the recording exists, people would die for it and Swagger would not be safe. He states that now he is only a man who lives in the hills with to many guns and gets on his knees as FBI helicopters arrive on the scene. Meachum, clearly satisfied walks to his helicopter and leaves the scene. While Johnson and Swagger wait for the FBI, Johnson tells Swagger that the FBI has his rifle, found at the crime scene. Swagger then gets arrested by the FBI.

Swagger asks for a meeting with the head of the Department of Justice to prove his innocence. Memphis, his supervisor and Johnson are present, though the latter is clearly angered by the fact, stating that he can't be framed for anything. It is revealed that dozens of highly-ranked and powerful placed individuals have already demanded Johnson's release. Johnson is told to sit and by quiet as this meeting is about justice, not about powerful friends. When presented with his rifle found at the crime scene, Swagger reveals that he always swaps the fire pints on his guns after using them, meaning that it is impossible to shoot the gun supposedly used for the archbishop's murder. Swagger is proven innocent. Johnson's states that this doesn't prove his guilt. The men are then presented with images from the mass grave in Ethiopia. Despite the evidence being shown, they can not arrest Johnson because the crime is outside of American jurisdiction. Johnson leaves the room, taunting Swagger that he still wins.

That night, Johnson, Meachum and their associates celebrate in a house in the wild. Meachum then tells Johnson about a new task in Ecuador, where he will once again slaughter locals who interfere with Meachum's plans. Johnson says that the problem is solvable when one of Meachum's assistance stated that they are running into difficulty negotiating payment with the mercenaries to carry out the massacre, just as one of the guards gets sniped and falls on the table. Deducing that Swagger is here, Johnson gets up, but Swagger kills Johnson by shooting him behind the throat, much to Meachum's distraught. After killing Meachum and the rest of his men, Swagger leaves the gun on Johnson's corpse to frame him for the murders once their bodies are discovered and uses the oven to create a gas explosion to make it look like it was accidentally hit in the process of killing Meachum and his bodyguards. 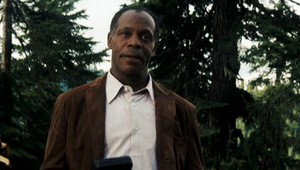 The Colonel with one of his henchmen.

Johnson and Meachum waiting for Swagger.

Johnson and Meachum celebrating their victory. 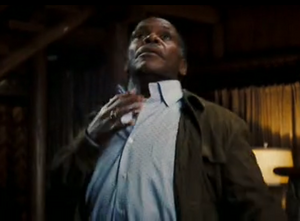 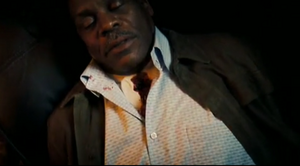