Senior Colonel of the United States Military (formerly, before he lost his position)

Save humanity from extinction by eradicating the apes (succeeded; but not in the way he hoped).

He was the ruthless leader of the Human Military Arm Alpha-Omega, a rogue military force, and is an iron-fisted colonel obsessed with wiping out the entire Ape colony to vindicate his people from obliteration and save humanity from the evolution of the Simian Flu by any means necessary. He also becomes the arch-nemesis of Caesar after personally killing his wife Cornelia and their eldest son Blue Eyes in an attack.

He was portrayed by Woody Harrelson, who also played Mickey Knox in Natural Born Killers, Charles Costello in Seven Psychopaths, Harlan DeGroat in Out of the Furnace, Tobias Beckett in Solo: A Star Wars Story and Cletus Kasady/Carnage in Sony's Spider-Man Universe.

McCullough was very brutal and aggressive and had an extreme conflict against the apes. He firmly believes that the apes are destroying the world, that peace between them is impossible due to their superior strength and rising intelligence and humans will inevitably become cattle to apes. Because of this, he is determined to eliminate all apes in order to ensure humanity prevails, and his hate comes very naturally against his enemies. Despite this, McCullough showed some degree of respect for apes (unlike the likes of Steven Jacobs, who saw them as lab-rats at best), commending that he had heard tell of Caesar's reputation and was actually impressed by his nemesis' intellect and leadership, although it's really more out of envy than genuine respect.

However, despite being extremely cruel and warmongering, he did have a big side of good, where he actually sees the apes as worthy enemies and constantly does what he thinks is best for the human race. He put aside his own humanity and his own internal emotions to kill his son who was infected with the mutated virus because he knew if he didn't, all other humans would be infected and they would all lose their ability to speak, and thus a part of their humanity as a result. He also told Caesar to realize if he killed him, then his men would most likely kill all of the apes because of Caesar's personal desire for revenge. His line of abandoning humanity to save humanity parallels his own emotional turnover into a rather cold yet honorable leader who would do whatever it took to save the human race, to the point that even his son's life and his own life were nothing in the grand scheme of human survival.

While it is partially true, it also shows that McCullough was delusional with this mentality, thinking his actions were justified purely for that reason and putting aside all other emotions like compassion, empathy, and even his own life and replaced it with the sole objective of survival. Because of this mentality, he had a general disregard for the infected and their relatives, simply expecting them to sacrifice for the good of humanity like he did. He did not tolerate anyone who disagreed with his orders to kill the infected and burn their belongings, and he had them killed in order to preserve order and assert his authority on the matter. He was also unwilling to solve the issue in another manner, and when his superiors suggested a medical solution was possible, McCullough rejected this proposal, viewing it as proof they had learned nothing from the past and therefore, dropping the ball on a potentially effective way to achieve his goal of saving humanity, also arguably proving he ultimately cares more about his ego and position of authority than humanity. While he was very brutal, he was also very cool at times, whenever he teases or tortures Caesar, he almost always stays calm. However, in his final hours, McCullough showed violent incredulity and anger about catching the virus, trashing his office and getting drunk, to the point that he was utterly defenseless when Caesar arrived. Broken and helpless, McCullough went so far as to put his own gun to his own forehead and urge Caesar to take the shot.

The Colonel is first seen after his soldier, Preacher tells him he is unable to stop all the apes after an attack goes awry. The Colonel later comes to the ape village himself, rappelling from a waterfall with several other soldiers. While his soldiers are killed, Colonel manages to kill Cornelia and Blue-Eyes, thinking Blue-Eyes was Caesar. The Colonel tells his soldiers that he killed Caesar, when actually he killed Blue-Eyes, claiming "King Kong is down". Caesar hears this and realizes what is happening. He returns to his family, only to find out his oldest son and wife are now dead. Colonel is near the waterfall, preparing to flee the scene on the cables they descended with. However, he turns and notices Caesar, who is enraged at the death of his family.

The Colonel starts shooting at Caesar, but disengages and climbs the waterfall. Caesar grabs onto the cable and climbs on pursuit, but the Colonel cuts the cable, sending Caesar back down into the water, and escapes. A while after, Caesar comes across some dead apes tied to large "x" shaped posts in the mountains, near the abandoned weapons depot that the Colonel and his soldiers operate out of. Caesar is noticed and captured and is brought to the depot, where Colonel talks to him and is amazed at how human-like Caesar is. He orders Caesar to be put to work, building a large wall, like all the other apes.

Colonel watches the apes work, and orders rogue gorilla, Red, a former follower of Koba, to whip an orangutan who failed at his task. The Colonel watches as Red viciously attacks the orangutan and continues to watch as Caesar yells at Red. Colonel orders Caesar and the orangutan to be put in front of him. He ruthlessly kills the orangutan then aims his gun at Caesar. He orders Red to tie Caesar an "x" shaped post in the middle of the depot, for all to see.

Later, Red cuts Caesar down, saying that Colonel would like to speak to him. In his office, Colonel tells Caesar that the apes won't receive food or water until their work is finished. Caesar taunts him for killing his own men. Colonel explains that the Simian Flu is still carried by all survivors, and overtime, the effects progress to the point of being unable to speak. He claims this is what happened to his son, and says he sacrificed his own son to protect humanity. The soldiers he killed had the same inability to speak.

Colonel then tells Caesar that he is building a wall to help defend his army from the actual human military, who he claims fear him and are trying to stop him. He finally tells Caesar that he didn't actually mean to kill Blue-Eyes, but that he does not feel bad for what he did. This angers Caesar into attacking Colonel, but is quickly restrained and brought back to his post.. In the morning, the worker apes are given food and water, however when it is Caesar's turn, Red pours the cold water on his head. Caesar is up on the post for a while longer and he is freezing due to the water being poured on him and being exposed to the cold climate around the depot, before being cut down. Colonel says to Red that in the morning Caesar will go back to work or be killed.

The same night, Colonel is in his office while all the apes escape the depot. As morning comes, so do the rest of the human military. They fire at Colonel's troops in helicopters and tanks. Colonel's troops manage to hold them off while the other soldiers attempt to reach Colonel, who has locked himself in his office. Caesar, set on revenge, manages to get into the Colonel's office via the balcony, and finds blood all over the room. He makes his way to the Colonel's bedroom to find him bleeding from the nose and reaching for a bottle of whiskey. Colonel looks up at Caesar, it happened, he was infected by the Simian Flu.

The war was at its peak as Caesar started feeling more like a warlord and got the thought that he was becoming like Koba in his mind again, something Maurice mentioned earlier in the movie. This was also a big effect on the military as much of the humans slowly succumb to the Simian Flu. Caesar grabs Colonel's Colt Commander that he used to kill the orangutan, and points it at the Colonel himself, intending to avenge his family's demise. However, rather than begging for his life, the Colonel instead aims the pistol's barrel on his head, signifying that he wants to die rather than live the rest of his life as a primitive being. Witnessing this, Caesar finally realizes the folly of revenge and that the Colonel is a coward driven by fear of living his life as an animal. Realizing now that killing the Colonel won't do any good and that he doesn't deserve any sympathy, Caesar puts the gun down and gives the Colonel a choice: either he kill himself or live as a primitive. Caesar watches as the Colonel chooses the former by grabbing the gun and shooting himself in the head.

The Colonel's troops enter the office just in time to see Caesar, who grabs a belt of grenades and escapes. After Caesar blows up a large tank of gasoline next to the wall with a grenade, the wall is destroyed. Minutes later, an avalanche occurs and the entire depot is covered in snow. The apes get away with it, having quicker and more athletic bodies, while the human troops slowly die. Despite the apes having won the battle, Caesar suffers the Colonel's fate as he too dies succumbing to his injuries (caused by Preacher), but not before he convinces Maurice to tell his young son Cornelius of what he has done for the apes. 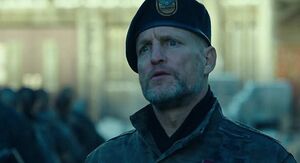 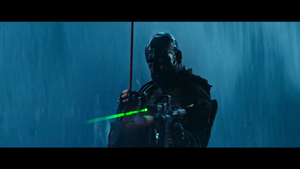 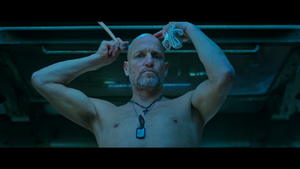 McCullough shaving his head during the war. 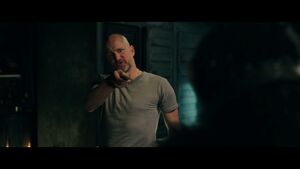 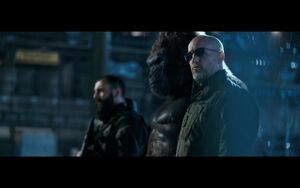 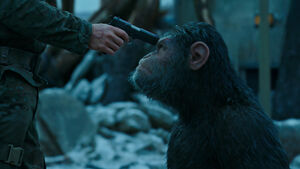 Colonel McCullough about to kill Caesar.

Colonel McCullough and his men.