Colonel Neidermeyer is the main antagonist of the 1996 comedy film The Stupids.

He was portrayed by Mark Metcalf, who also played Doug Neidermeyer in National Lampoon's Animal House.

Neidermeyer served the United States army well but they refused to give him a promotion to higher ranks, so he decided to get revenge and betrayed his country by selling America's weapons to other countries around the world for profit.

Neidermeyer arranged to meet many of the world's leaders in a secluded rubbish dump so as not to attract attention.

As he and his Lieutenant Neal showed the leaders all their weapons, they noticed a strange man amongst the buyers. Both Neidermeyer and Neal assumed that he was a secret agent for the CIA and decided to keep their eyes on him.

After exchanging thank yous from the buyers, the strange man, Stanley Stupid, came up and introduced himself. After exchanging conversation, Neidermeyer suspected that Stanley would turn him into to the police, so he gave him his car, much to Stanley's surprise and shook his hand with a great amount of gradititude.

Neidermeyer and the others waved goodbye to Stanley. Neal is impressed by Stanley's seemed bravery as he never seemed scared to be amongst so many soldiers. One of Neidermeyer's men said Stanley could still turn them in, so Neidermeyer sent him to assassinate him. But the soldier failed after having his jeep set on fire and then blown up unintentionally by Stanley. When Neal gave him the news that Stanley was still alive, he asked him to send veteran assassin McKlelan to kill him, but this failed also when Stanley blew a handkerchief full of chloroform into the assassin's mouth into a row of tyres. The assassin's switchblade knife suddenly burst one of the tyres shooting him up into the air and hitting the ground hard below into a chicken run.

By this time Neidermeyer was getting tired of their failings and asked Neal to send explosive expert Martinez to finish off Stanley once and for all. However unknown to them, Stanley escaped again when he spotted a bee in the car and mistook it for dangerous, so the car with an explosive attached to it blew up without him inside.

Neal and Martinez watched the explosion from a distance, satisfied that Stanley was dead and told Neidermeyer.

Later as Neidermeyer and Neal were relaxing after making arrangements to deliver the hardware at Warehouse 21. Neidermeyer turned on the television and to their surprise Stanley was on the screen singing a song. A furious Neidermeyer told Neal to bring Stanley to his base to assassinate him once and for all.

Stanley was captured by Neidermeyer's soldiers and brought to him. Neidermeyer congratulates Stanley for his plan of "fooling him into thinking he was dead and capturing him red handed when he went to make the sale".

He then leaves with Neal to head for Warehouse 21 leaving two of his men Lane and Smith to kill Stanley in cold blood, but Stanley finds his inner strength and escapes once again.

At Warehouse 21, Stanley gets their attention and Neidermeyer looks up in amazement when he sees that Stanley has survived yet again. Stanley tells the soldiers and buyers to give themselves up, but Neidermeyer orders a squad of men on each side of the warehouse to attack Stanley. After a slapstick battle resulting in much of the weaponry destroyed, the police arrive and arrest them all except Neidermeyer who disguises himself as a police marshal and betrays Neal by handing him over to the police before escaping.

During this time, Neidermeyer found the address of Stanley's home and set out armed with a silver handgun to kill him as vengeance for ruining his plans. He broke in just as Stanley and his family were arriving home and surprised them by hiding behind the front door. Neidermeyer snarled that Stanley destroyed his future, but he would not escape him this time. Before he could pull the trigger, the front door suddenly opened and struck him, knocking him out.

It turned out to a delivery man from Floyd's Deli who Stanley's wife Joan had called the day before, making sure that they had their delivery. The door closes again and Neidermeyer falls to the ground unconscious. He is presumably arrested after this.

Neidermeyer has a dangerous personality who would let nothing or no one stand in way to achieve his aim. He easily gets frustrated when his men fail to carry out their set task especially when he tells them: "We're military men, killing people is supposed to be our job".

He also seems to suffer from paranoia, as he saw Stanley immediately as a threat even though he was really a simple minded buffoon and thought he was only hiding his true self to make himself less suspicious.

Neidermeyer also proves to be disloyal to his own men when he disguises himself as a police marshal and allows them to be arrested by the police. He even turns in his own lieutenant as the ringleader of the smuggling racket to make his disguise look more convincing. 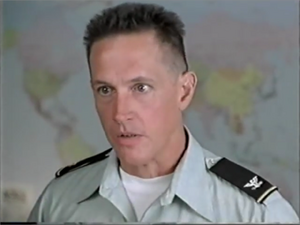 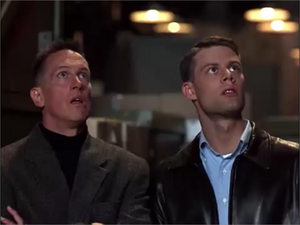 Neidermeyer with his Lieutenant Neal.

Neidermeyer defeated.
Add a photo to this gallery

Retrieved from "https://villains.fandom.com/wiki/Colonel_Neidermeyer?oldid=3228199"
Community content is available under CC-BY-SA unless otherwise noted.