Leader of the Noodle Syndicate

Get noodles to take over the world (failed).

Colonel Noodle is the main antagonist of Parappa the Rapper 2. He is in fact the son of the burger shop owner from the first level of the game, but got so sick of eating burgers all his life that he attempted to rule the world with noodles because he loves them so much.

He first appears in the first level of the game, Toasty Buns, which hints at his later true importance to the plot. He is seen serving burgers to people and Parappa; yet they all turn into noodles. While he tries to pass it off as not being that bad, it is in fact his own doing. This is hinted at when you fail a line in this level, as he can be seen mysteriously laughing from the sidelines. He is later seen again waving at a camera when the news is explaining the noodle camera, once again hinting at his true identity.

He is later seen in his truly villainous role on the cutscene before the final level of the game. Parappa discovers a wire leading to a building after defeating his Noodle Syndicate, which reveals to the heroes his identity.

He is the boss of stage 7, in a sort of rap battle against Parappa and himself in which the former tries to convice the Colonel that noodles are not the only food around. He succeeds, and Colonel Noodles ends up realising the error of his ways. He invities Parappa to a final concert, proving that he has turned good for the better, and the two become friends. He is then seen in that level along with the other teachers.

For a dictator-like figure, Colonel Noodle is a surprisingly meek person. When trying to convince Parappa and PJ to eat the burgers that have turned into noodles, he fumbles a bit over his words and fails miserably to convince them.

Although he seems to stutter and is socially awkward, he somehow managed to get an entire army of people on his side to help him take over the world with noodles.

He very much prides himself on his evil scheme, and is shown to not exactly be able to contain his smugness, even when trying to act innocent pre villain reveal.

Colonel Noodle is a short and chubby teenager with a nasaly voice, droopy eyes and a curly afro. He is shown in many outfits but the main two outfits are his Beard Burger work uniform and his villain outfit.

His work uniform, which he is seen in before the villain reveal and after he is redeemed, consists of a brown apron, red shirt and dark brown pants.

His villain outfit however is a black coat with a dark grey jumpsuit underneath with a strap around his shoulder and a belt. He also sports red spiky glasses, though they could easily be mistaken for a mask due to how his eyes appear. 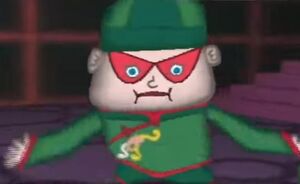 Colonel Noodle in his chinese outfit. 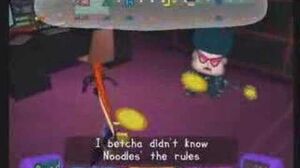 Retrieved from "https://villains.fandom.com/wiki/Colonel_Noodle?oldid=3795918"
Community content is available under CC-BY-SA unless otherwise noted.