King of the Grizzlies

Vengeful Poacher
Colonel Pierson is the main antagonist of Disney's 1970 live action film King of the Grizzlies, which is based on the 1900 novel The Biography of a Grizzly by the late Ernest Thompson Seton. He is a Canadian Rockies cattle baron who wants to kill Wahb for attacking his cattle.

He was portrayed by the late Chris Wiggins.

While Wahb's mother and the cubs are walking along, she hears noises. She hides the cubs and goes to investigate. Upon seeing a big roundup in progress (led by Moki), she leaves to take her family far from the presence of people. But when she returns to the cubs, she finds Wahb missing. She finally hears him hollering for help. He is running away from one of Colonel Pierson's bulls.

She charges, and, soon, the bull is dead. But Colonel Pierson arrives with Moki, and he shoots Wahb's family. He then shoots at Wahb, as well, and knocks him off a cliff into river rapids. Moki is greatly saddened by the deaths of the bears, but he resignedly continues with his work.

While he is riding alone, picking up strays, Moki finds a small four-toed pawprint in some mud. Wahb wasn't hit by the colonel's bullet, and he subsequently survived the rapids as well. Moki follows Wahb's trail until he finds him up in a tree. He is uncertain what to do about the cub, but unable to bring himself to shoot him. He ends up roping him out of the tree, hogtying him, and taking him up into the high country.

He turns him loose up there and goes back to the ranch. Meanwhile, Wahb's search for his family turns into a search for food, until the onset of winter when he returns to the den he was born in to hibernate. When Wahb is four years old, he returns to the Gray Bull. While there he learns a valuable lesson about "free" food and steel when he blunders into some wolf traps set by Moki. (Of course, he is unharmed by them since they were made to wound wolves, not grizzlies.) When Moki returns from shooting the wolves, he tells Colonel Pierson about seeing Wahb.

He admits to having rescued Wahb when he was a cub. Colonel Pierson is surprised by this revelation, but, although he isn't necessarily happy about it, he isn't upset with Moki. Soon after, Wahb has a run-in with a ranch-hand named Shorty Russell. Shorty is out setting fence when he encounters Wahb. Although Wahb is in a curious mood and doesn't attack Shorty, Shorty is terrified and returns to the ranch with a vivid tale of how he survived a ferocious grizzly.

Colonel Pierson orders Moki to get bear traps from a nearby ranch and lay them all over the area where Wahb was seen. Moki detests his chore, but he does it to the best of his ability. His efforts are useless, however. Wahb has learned his lesson about traps. As he travels through the forest, he disarms Moki's traps one by one and eats the bait.

A few weeks later, 1,250 lb. Wahb wanders onto Colonel Pierson's ranch. When he happens upon a corral of select white-face cows, they panic and break out. They stampede and run into the main herd, which completely turns the entire roundup into chaos. Nobody is hurt by the incident, but some cattle are lost, and Colonel Pierson is now determined to rid himself of this grizzly once and for all.

Against Moki's advice, he leaves to hunt Wahb alone. Unwilling to let the Colonel undertake such a dangerous task all by himself (and perhaps desiring to save Wahb's life as well), Moki trails after the Colonel. Meanwhile, Wahb has returned to the high country and entered the territory of a grizzly king. He and the other grizzly engage in combat, and Wahb is victorious. He is now master of the area, but his new reign is interrupted by the arrival of Colonel Pierson, who fires a shot at him. The bullet misses, but, after the Colonel starts trailing him again, an angry, hunted Wahb doubles back and gets on the Colonel's trail.

Moki sees the first sign of trouble when he comes across pawprints on top of hoof prints. He quickly guesses what is happening and fires a couple of warning shots. Mistaking the shots for distress signals, Colonel Pierson turns around and races back down the trail. As he passes a rocky ledge the figure of Wahb appears above him. Colonel Pierson's horse spooks and Colonel Pierson tumbles down a steep slope, losing his rifle in the process.

Because he hurt himself in the fall, he is unable to go get his rifle and is therefore unprotected. Moki arrives just then, however, and he climbs down to the Colonel. As he is examining the Colonel's injuries, Wahb appears. Moki is armed with only a pistol which is definitely not sufficient to stop an angry grizzly bear. Once again, however, Wahb departs, leaving Moki and consequently Colonel Pierson unharmed. Once Moki gets the Colonel back onto the trail, Colonel Pierson limps to a spot where he will be able to shoot Wahb when he appears.

Moki attempts to get him to stop, but his mind is made up. Just when he is about to pull the trigger, Wahb begins to mark a tree with his claws. Moki tells the Colonel that, because of this, Wahb will not return to the Gray Bull (which is true; he will stay and protect his territory). Still unconvinced, the Colonel raises his gun one more time. But again Moki calls his name, and, when the Colonel turns, he sees the rifle shells in Moki's hand. Seeing how much the bear means to Moki and hoping he will stay away from the Gray Bull now, Colonel Pierson relents, and they go home. 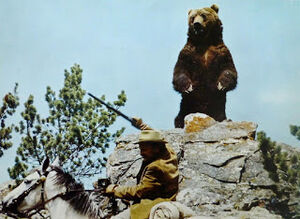 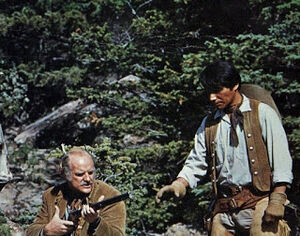 A job that must be done. 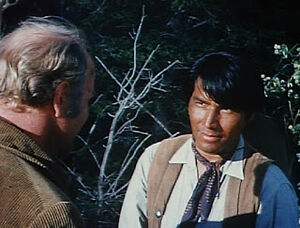 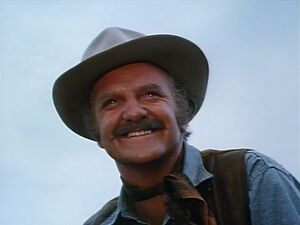