Leader of the Rebellion Army
Tyrant

Deploying X and team on missions

Attain the Supra-Force Metal to rule the universe.

Bring about the evolution of Reploids and rebel against all humans on Earth.

Colonel Redips is the military leader of the Rebellion Army and the main antagonist of Mega Man X: Command Mission. Initially, he appears as the well-meaning commander of X and Zero who instructs them to destroy the "Rebellion" group led by Epsilon. For most of the game, he only appears a few times, contacting X about the mission.

In the end, Redips is pursued to his secret chamber where he is hooked up to a machine that uses a massive amount of Supra-Force Metal to transform him into an enormous godlike monster. This "Great Redips" easily overpowers X and friends, but then Ferham suddenly shows up and breaks off one of his Supra-Force Metal outlets, weakening him and making him vulnerable. After merging with the Supra Force Metal, Great Redips became power-hungry, as well as developing a god-complex - opting to rule the entire universe itself. Great Redips is destroyed and returned to his original form as he dies.

In his final moments, Redips calls X and the team Mavericks for being obedient to their human masters and not wanting to "evolve" past them.

Once in the Orbital Elevator Babel, X finds Redips using a bizarre machine to emower himself with the Supra-Force Metal recovered from the missile and Epsilon's body. After admitting he was using X to acquire the metal, he declares his intent to use the Supra-Force Metal to evolve strong enough to rule the entire universe and transforms into a giant battle body.

At first, Redips' regenerative and barrier abilities prove too much for X and his friends. Surprisingly, a repaired Ferham comes in and rips out Redips' regenerative Supra-Force Metal fragment, greatly weakening him to the point where X was able to defeat him, turning him back to his original form. With his dying breaths, Redips tells X, Zero, and Axl that, due to their unwillingness to evolve, they are the ones that should be considered Mavericks. Afterwards, Ferham takes the Supra-Force Metal she stole, jumps off to space, and self-destructs in order to eliminate it.

Aided with the power of regeneration and barrier abilities of the Supra Force Metal, Great Redips became absurdly strong to the point that X and his allies were having a hard time against him.

However if the Supra Force Metal is removed, he becomes weakened, which would lead to his downfall. 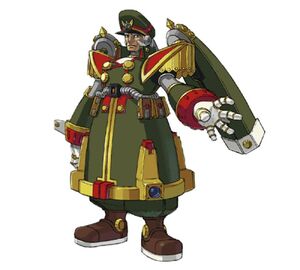 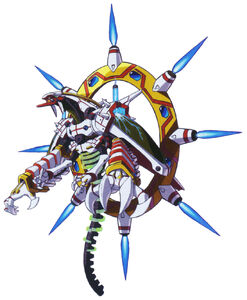