The Shape of Water

Having sexual fantasies about Elisa.

Dissect the Asset for science.

Kill Elisa and anyone who opposes him (all failed).

Richard Strickland is the main antagonist of the 2017 fantasy romance film The Shape of Water, directed by Guillermo del Toro.

He was portrayed by Michael Shannon, who also played Zod in Man in Steel, Frankie Lombardo in Kangaroo Jack, Rick Carver in 99 Homes and Captain Beatty in the 2018 remake of Farenheit 451.

Strickland works as the head of the Occam Aerospace Research Center in the early 1960s of Baltimore. Sometime later, Strickland discovers an amphibious humanoid creature in the rivers of South America. Whilst being imprisoned by the institute. One day the creature bites off Strickland's left hand's last two fingers, Elisa Esposito, a mute woman working the nightshift as a janitor for the Occam Aerospace Research Center and her friend Zelda Fuller, also a janitor, clean the laboratory from all the blood, Elisa finds Strickland's fingers and saves them in her lunch bag, Zelda then leaves the lab to look for someone who could take the fingers, Elisa discovers the creature and began to interact with the humanoid creature that Strickland had dubbed as "the Asset." After Strickland's fingers are put back on his hand, he warns Elisa and Zelda about that creature, however Elisa intrigued by it began to feed the Asset hard-boiled eggs, and plays recordings of music for it with her portable turntable. Soon, a relationship began to bloom between them. Meanwhile Strickland has grown a sexual desire for Elisa despite him already having a wife.

Strickland and The Asset

Strickland, reporting to his superior, General Hoyt, the two begin to converse on the discovery. Curious about the Asset's biology, Hoyt demands Strickland to begin preparations to dissect the Assect so that its organs can be used for the improvement of space travel. Unbeknownst to Strickland, one of the scientists working in the facility - Robert "Bob" Hoffsteler - is secretly a Soviet spy called Dimitri who secretly delivers information to his superiors. Despite this Bob is truly fascinated by the creature and is excited to do breaking discoveries, however his superiors from both sides have different plans as the soviets want him to kill the creature and examine it.

When Elisa enters the laboratory one day to feed the Asset with eggs, she finds it outside the water, chained and bleeding, in that moment, Strickland, Hoyt and Bob enter the lab, Elisa hides and hears them talking about dissecting the Asset, Bob spots Elisa but says nothing, despite his pleas to spare the Asset, Bob's pleas fall on deaf ears, and Strickland orders the operation to be conducted. Elisa starts to formulate a plan in order to save the Asset with the help of his neighbor and close friend Giles, a homosexual advertising illustrator. Bob finds out about Elisa's plan and decides to help her, using a device given by his soviet superiors to shut down the building's lights. Elisa hides the Asset in a laundry cart and Bob gives her the instructions for taking care of "him" and lets her go. Zelda finds out about the plan and helps her friend taking the Asset to a van disguised as a Laundry company van driven by Giles, Strickland finds out through the security cameras and runs to stop them, however, Elisa and Giles were already leaving (accidentally crashing into Strickland's new Cadillac) and Zelda and Bob had already disappeared. Elisa takes the Asset to her apartment, keeping him alive in her bathtub by using chemicals that Bob gave her. Strickland began to implicate that Elisa and her friend Zelda were most likely the ones behind the Asset's disappearance, but he immediately drops his suspicion upon reflecting on their lowly titles. He also realizes his fingers couldn't be saved as they start rottening in his hand. He sends one of the scientists to spy on Bob and eventually realizes Bob is a soviet spy and he immediately blames the Asset's kidnapping on the Soviets.

With the Asset's health worsening, Elisa hatches a plan to release the Asset into the canal within days banking on how there would be few witnesses. Realizing that the Asset wasn’t dead, Hoyt threatens Strickland's livelihood, giving him 36 hours to find the Asset. Bob's superiors also become incensed against him, agreeing to meet him at a rendezvous point with two superiors. There, Bob is shot in the stomach and through the cheek but before he can be killed, Strickland kills Bob’s superiors and proceeds to coldly torture him in an attempt of extracting information about his superiors. Bob reveals that it wasn't the soviets and that it was Elisa and Zelda who were behind the the Asset's disapperance. Strickland then leaves Bob to die of his wounds. He then invades Zelda's house, and threatens her for more information which leads to her husband having to reveal her role in the operation. After Strickland leaves, Zelda calls Elisa and Giles to warn them. When Strickland arrives to Elisa's apartment it was already empty, but he finds a note on the calendar and the bathtub filled with water and chemicals.

When Giles and Elisa arrive to the canal, before the Asset is released, Strickland arrives and immediately knocks down Giles before fatally shooting Elisa and the Asset. Giles wakes up and hits Strickland in the face with a piece of wood. As the Asset recovers from his gun-inflicted wounds due to his regenerative abilities, Giles embraces Elisa protecting her. As Strickland tries to reload his weapon, the Asset walks up to him. Strickland is astonished and says "F**k. You are a god" and the Asset slices Strickland's throat with his claws. As the police and Zelda arrive, Strickland falls to the ground and dies. The Asset then carries Elisa and enters into the canal with Elisa's body, and uses his powers to create gills that take the place of the scars around Elisa's neck. Now, the two can remain together. 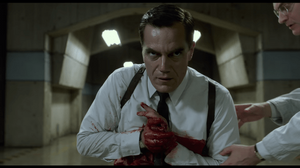 Strickland loses his fingers after allegedly been bitten by the Asset. 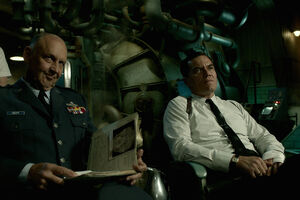 Strickland and General Hoyt in a discussion over the Asset's origins. 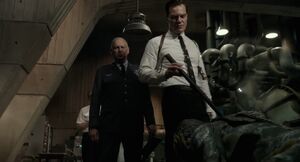 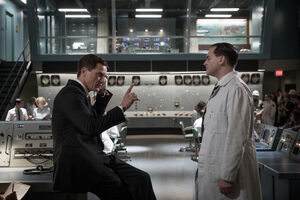 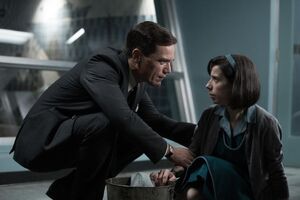 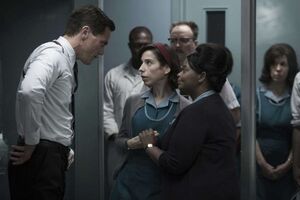 Strickland interrogating Elisa and Zelda on the whereabouts of the Asset only to later dismissed them due to their lowly titles. 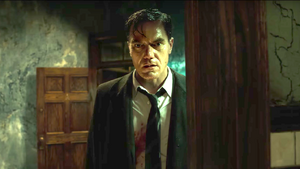 Strickland arrives at Elisa's apartment after removing his rotten fingers in front of Zelda in his frantic search for the Asset, only to find the apartment empty and figured out Elisa's and the Asset's destination.