Getting whatever he wants.

Get rid of John McClane for interfering in his plans
Escape from USA together with General Ramon Esperanza and his men and Major Grant in order to live as wealthy men (failed).

Colonel William Stuart is the main antagonist of the 1990 action thriller film Die Hard 2. He is a former senior United States Army Special Force colonel who went rogue and became a terrorist leader bent on freeing General Ramon Esperanza from prison and escaping the United States.

He was portrayed by William Sadler, who also played Vernon Trent in Hard to Kill, Sheriff Doakes in Machete Kills, Luther Sloan in Star Trek: Deep Space, Niles Tabot in Tales From the Crypt, Wilson Concannon in The Hills Run Red, and Tony Teresi in Power.

Stuart is a former army colonel who was once trained by Major Grant, and he plans to betray his country and free General Ramon Esperanza from confinement in America. This all starts when Stuart and his men take over a church and tamper with Dulles Tower's controls, making replicas of them. When Dulles Terminal police try to get to an antenna, Stuart retaliates by deliberately misguiding a British airliner while impersonating himself as an air traffic controller, causing the jet to crash into the tarmac and explode, killing all 230 people on board, much to the horror of John McClane. Stuart and some of his henchmen later try to kill McClane with hand grenades, and Grant leads his team in joining forces with Stuart.

At the end of the film, Stuart, Grant and Esperanza board an empty 747 getaway plane along with the other terrorists, preparing to fly to South America to retire to paradise. McClane, however, jumps onto the wing of the plane from a helicopter and jams the flaps, preventing the plane from taking off. Stuart and Grant investigate and McClane battles Grant on the wing, eventually kicking him into the jet engine. Furious at McClane for interfering with his plans and killing his mentor, Stuart attacks him and easily gains the upper hand. He manages to kick McClane off the plane but not before McClane is able to open the fuel dump hatch, unnoticed by Stuart as he re-enters the plane. This sends fuel spilling out onto the runway which McClane then ignites using a lighter. As the plane soars into the air, the flames follow the trail of fuel back to the plane and cause it to explode, killing everyone onboard, including Stuart and Esperanza.

Stuart and the other terrorists are incinerated as their getaway plane explodes (McClane: Yippee-ki-yay, motherf--ker.) 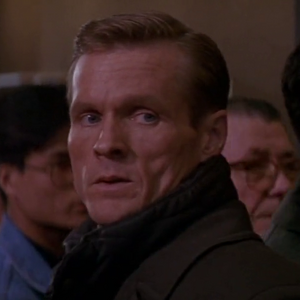