The Colonial Rite of the Templar Order

Further the goals of the Templar Order.

Find the Grand Temple.
Take over the thirteen colonies and unite them all under Templar rule.

The Colonial Rite of the Templar Order is an organization that serves as the main antagonistic faction of the 2012 sandbox style videogame Assassin's Creed III and the main protagonistic faction of Assassin's Creed Rogue. The Colonial Templars were one of the various factions based in the thriteen colonies of British America that served as one of the rites of the Templar Order. This organization consists of about 28 members.

Their goal was to locate the Grand Temple and help unite the colonies under Templar Rule by orders of Reginald Birch, the Grand Master of the British Rite of the Templar Order. The Colonial Rite would play a major role in shaping the American Revolution as they sought to shape the newly formed United States in their image but faced opposition from the newly reformed Colonial Assassins.

In 1738, Reginald Birch of the British Rite of the Templar Order, had named Lawrence Washington to become the Master Templar of the British Colonies in the New World and was tasked with locating various temples and other First Civilization relics located in the region. Upon arriving, he would go and recruit new members to the Templar Order such as Samuel Smith and William Johnson , and also contacted Christopher Gist. Gist also got into contact with Jack Weeks, a young thief who attempted to pickpocket him but was recruited into being his errand boy instead after he was caught.

12 years later in 1750, Birch had sent Templar Agent Geogre Monro to assist Washington in his search for the temple and Monro was introduced to Weeks by Gits in the process who had also agreed to assist him in his search in the process. Eventually, Monro taught Weeks about the Templar Order and had him initiated into the Templar Order 1751 along with Gist that same year. In 1751, an earthquake had ravaged Port-au-Prince in the French colony of Haiti and the Templars took advantage of that and ended up stealing numerous relics from the Haitian Assassins; the Percuser box and the Voynich manscript and handed over the artifacts to Samuel Smith on his plantation in 1752 by Washington before being killed by Assassin Shay Cormac.

Afterwards, Wardrop took over as the de-facto leader of the Templars in the colonies while Smith traveled to Europe to find a scientist who could make the box work. In 1754, Smith had returned to Colonial America only to be killed by Shay Cormac who claimed the box for the assassins. That same year during the Albany Congress, the Templars came into contact with Benjamin Franklin to see if the scientist could make the box artifacts work however, Shay Cormac had arrived again and killed Wardrop before he could pass the maniscript over to Johnson and recovered the artifact.

In the year 1754, British Templar Haytham Kenway had acquired a mysterious key known as the Grand Temple Key after he had killed Miko, the Mentor of the British Assassins, and after further examination, the Templars had concluded that it was a key to the Grand Temple and Reginald had ordered Kenway to travel to the colonies to find the site. In August, Haytham had arrived in Boston and was greated by Charles Lee, a hopeful man who had sought to join the Templar Order. With Lee's help, Haytham was able to gather the four Templars Birch had ordered him to; William Johnson, Benjamin Church, and John Pitcairn. Having met Jonhson in the Green Dragon Tavern, Haytham soon learned that the Assassins had stolen John's research on the native tribes. With Charles and Thomas Hickey, Johnson's assistant and fellow Templar member, Haytham reclaimed the chest with Johnson's research. Now with his papers, Johnson concluded that the symbols on the Grand Temple key were from a tribe known as the Kanien'kehá:ka, and that they would need their aid to find the Temple. Haytham and Charles searched for Benjamin Church, but discovered that he had been abducted by Silas Thatcher, a cruel British officer who demanded protection money. Fortunately, Haytham and Charles managed to save him from Silas' assistant, Cutter.

Later, Haytham and Charles tried to recruit John Pitcairn, but was stuck in the British Army by General Edward Braddock because he believed that he was a deserter. Some time after, Haytham and Charles attacked the guards who were escorting Pitcairn and freed him. Learning that Thatcher had a group of Kanien'kehá:ka slaves, Haytham and his brothers decided to infiltrate Southgate Fort as British soldiers and free the natives in exchange for the location of the Grand Temple. The Templars then managed to find and steal a slave carriage where a native woman, named Kaniehtí:io was being prisoner. Upon arrival at the fort, the young woman flew the carriage to free the native. The Templars and Kaniehtí:io succeded in liberating the slaves, which created a fight between the guards and the prisoners. During the battle, Church shot Thatcher in the head. When the natives left the fort, Kaniehtí:io smiled to Haytham as sign of gratitude.

In 1755, Haytham and Charles had searched for Kaniehtí:io in the Frontier and when they found her, the woman tried to run away but Haytham managed to caught her. The Templar explained to her why he needed her help but Kaniehtí:io refused before Haytham tried to prove that he could be trusted. Haytham even promised to help the natives stop the British expeditions into their territory. During their investigation, they discoverd that with the outbreak of the French and Indian War and the British Government had arranged for Edward Braddock to lead an expedition to the French-controlled Fort Duquesne.

In July, the combined assault of Haytham's Rite and the Kanien'kehá:ka tribes, together with a timely assault by the French Army, led to the destruction of the expedition, and the presumed death of Edward Braddock at Haytham's hands. True to her word, Kaniehtí:io led Haytham to the Precursor site, though the latter was disappointed to find little more than a cave. Later, Haytham returned to the Green Dragon and explained to his brothers that the Kanien'kehá:ka cave had led to nothing. He decided to officially establish the Colonial Rite of Templar Order with him as the Grand Master, and inducted Charles Lee in their ranks. The Templars would continue to search the Temple and helped the unification of the Colonies by aiding the British Crown against the French.

Purge of the Assassins

In 1756, Monro and his  men had saved Shay Cormac, who was left for dead after he had betrayed the Colonial Assassins. On Shay, Monro had found the Voynich Manscript. Now understanding his new allegience, Monro lead the former assassin to Barry and Cassidy Finnegan, a couple who's son is in the Templar Order, to recover his wounds. The Finnegans were then attacked by an Assassin-affiliated gang and Monro plotted to attack their headquarters but a recovered Shay got there first and killed their leader. Seeing the potential in Shay, Monro had covinced Shay to work for him without revealing his Templar affiliation and agreed to help the colonel rebuild New York City. 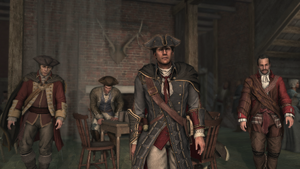 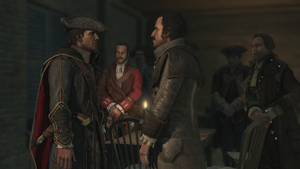 Retrieved from "https://villains.fandom.com/wiki/Colonial_Rite_of_the_Templar_Order?oldid=4177957"
Community content is available under CC-BY-SA unless otherwise noted.