Can turn into snakes

Colony Sarff (simply known as Sarff) is the supporting antagonist in the Doctor Who episodes, The Magician's Apprentice and The Witch's Familiar. He is a being comprised of one large and many small snake-like creatures who by working in unison, could mimic a single humanoid being. The snakes could also act independently and work as a democracy.

He was portrayed by Jami Reid-Quarrell.

Sarff searched the Maldovarium, the Shadow Proclamation and Karn for The Twelfth Doctor. When on Karn, he encountered the Sisterhood who stopped him from using his powers on them. He told the Sisterhood's High Priestess Ohila that Davros was searching for the Doctor, unaware that the Doctor was watching him from behind a rock there.

Sarff returned to Davros and was told by his master that in order to find the Doctor, he must find his friends. He followed Clara Oswald (the Doctor's companion) and Missy to 1138 Essex where he used his snakes to bound the Doctor, Clara and Missy's hands before taking them on his ship to Skaro. He then took the Doctor to Davros, who then asked Sarff to leave.

Later, Sarff's snakes recaptured the Doctor when he escaped in Davros's chair as they were hidden in it. He later disguised himself as cables in Davros's life support system to steal the Doctor's regeneration energy. When the Doctor touched the cables, Sarff began to drain his energy which hearted Davros and improved the Daleks.

But Missy arrived and shot the snakes with a Dalek gun and the machine was destroyed, killing Sarff. 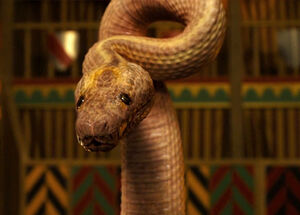 The main snake of Colony Sarff 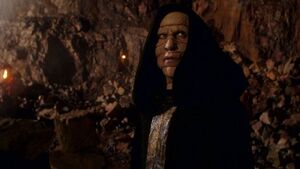 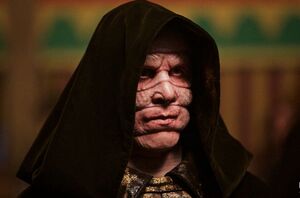