Destroy the Autobots, and serve Meltdown

Mutated Human
Colossus Rhodes is Meltdown's brutish right-hand in Transformers: Animated. He can use his nano-enhancers to bulk up with muscles and grow bigger.

Colossus Rhodes debuts in Total Meltdown, where he was a wrestler, Bumblebee thought that he was the little guy but uses his Biotechnology cylinders to become bigger, and starts to wrestle him, then Bumblebee fights back, and the rest of the team battle him, but couldn't be defeated, until Prowl found his weak spot which was the cylinders, in which he throws his ninja stars at them, and Rhodes shrinks back to normal size, after he was defeated Promethemus takes him back to his lab, and reinforces them. After that, he returns and starts to destroy the Autobots again, Prowl tried to use his ninja stars to break them, but Colossus turns around and says "Boss, reinforced that little weak spot", then grabs a street light to batter at all the Autobots, and Bulkhead's wreckingball, and ends up getting stuck in a hole that was on a force field, and when the bots found out his new weakness Optimus Prime starts to use his ax to hit a church bell louder to make him stop.

He and his boss return in the episode Survival of the Fittest, where Meltdown mutates animals, and take over Dinobot island, and mind controls the Dinobots to destroy the Autobots, as they kidnap Sari and keeps her locked in a cage, and Colossus watches her, so she doesn't escape. However, Sari tells him that she needed to use the bathroom, (only to trick him into thinking that something was wrong with the toilet), and she uses her key to splash water on his "electro thingies". 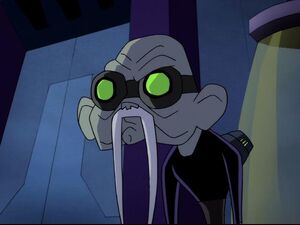 In his normal form. A mustache yoda grew. 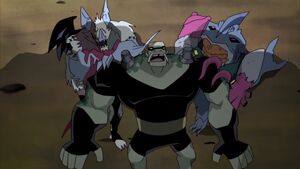