Colour Out of Space

Colour Out of Space

The Colour
Color Out of Space
The Color

The Colour out of Space

Leave the planet Earth after devouring and corrupting as many lifeforms as it can.

This creature is known to drain the life out of all animal, plant and sapient life that it encounters. Arriving on a strange meteor, it proceeds to destroy everything it encounters.

In Lovecraft's story, the Colour Out of Space is an alien entity of unknown origin or function that crash-landed on Earth upon a meteor, and soon became a catastrophic force that drained the life of any living creature it came across. It has since become noted as one of the more iconic aliens of Lovecraft's works, and embodies much of his cosmic horror in which protagonists rarely win and the "enemy" is both unknowable, largely unstoppable, and often beyond simple good and evil since the Colour Out of Space is neither good nor evil, but simply alien, albeit incredibly dangerous to all other life due to their properties.

Colour possesses mutagenic properties around the house melted faster than anywhere else nearby, and skunk cabbages of prodigious size and unusual color sprouted out of the soil. The trees budded early and were observed to be moving even with no wind of any sort. Sprouting saxifrage bore the same unnatural hues as the cabbages.

Within a few months all plant life near the site took on unnatural properties and odd hues to the point where the road running near it fell into disuse, owing to people fearful of seeing such a sight. Although all plant life in the area tended to die away, some, most notably trees, reacted in an unusual way.

One member of the family claimed that the branches of some trees "swayed also when there was no wind," although it is never established if this swaying was the result of specific manipulation from the alien species, or was merely another example of the unusual growths.

As the months went on, the corrupting influence of the Colour spread to encompass a large patch of land, this place being referred to as the "Blasted Heath" By locals.

At the center of The Heath lay the farm of the Gardener family, which one by one started to fall to the Colour's light. The Wife and one son, Thaddeaus, were driven insane rambling on about dancing lights that they alone could see.

Soon after, the second child, Merwin, vanishes while fetching water from a well, all that was left of him being the melted heap of metal that had been his lantern and bucket. After a few weeks with no word from Nahum and Zenas, the only two of the family still sane, their concerned friend Ammi Pierce visits.

Inside the house, he finds a delirious Nahum, who when asked where Zenas is, replies that he "Lives in the well" Fearful of what became of Nahum's wife, Nabby, Ammi goes upstairs to the attic room she and Thaddeus had been locked in. Here, he comes across a being the he was incapable of describing. A monstrous entity that radiated hatred and with orbs of light dancing around it, crawling towards him even as its body crumbled into dust.

After killing this being, which is heavily implied to be a horribly mutated Nabby, Ammi returns downstairs to find that in his time gone, the Colour had attacked Nahum, who crawls towards him while melting into nothing.

When asked what it was that did this to him, Nahum just barely has it in him to speak. "Cold and wet....but it burns." He says, "A kind of smoke that lived in the well." He warns his friend that, "You know something's coming but it ain't no use." And, "It comes from some place where things ain't as they is here."

His final words before being reduce to grey dust are to "Look out, Ammi! It'll do something more! Sucks the life out."

Ammi fled, returning with others, during which they investigate the well, finding at the bottom a pool of grey sludge, in which were the skeletons of various animals, along with the corpses of Zenas and Merwin. That same night, a violent storm begins, everything pulsating and throbbing in time to the flashes of light escaping the well.

Running for their lives, the men get far enough to turn and watch as the Colour rapidly shot itself up into space and left Earth with everything it had ever touched glowing with its mixed colors, and the trees pointing their branches up towards the sky.

However, while the others continue to flee, Ammi stays long enough to watch as a small orb of light attempts to follow the rest of the colors into space. It fails, falling back into the well. The knowledge that a portion of the alien still lives on earth is enough to disturb Ammi's mind.

All things organic that it had associated itself with are crumbled into dust. The farm which had been invaded was located near one of four towns later flooded to form a reservoir. 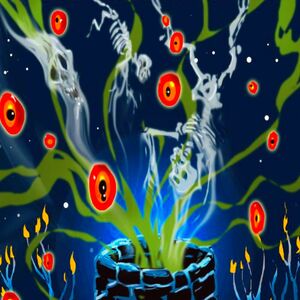 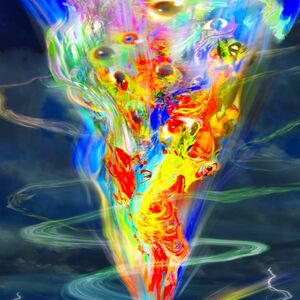 The Colour corrupting those around it, draining their life-force. 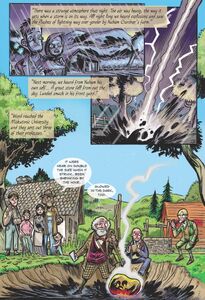 The Colour crashing to Earth.