Fighting against their opponents.

Winning the Tournament of Voltagen.

Homicidal Fighters
Combat Teams are the fighting teams from the videogame Electricman 2.

While it's assumed that the goal of all the combat teams is to beat Death, win the Tournament of Voltagen, and become the strongest and most powerful beings in the whole universe, they are only ever seen battling Electric Man, thus that is their main role in the game.

Replicants are the weakest combat team but come in more numbers than the rest. They are seen fighting against Electric Man in the first and second rounds. They appear to have only one red eye and gray armor.

The Frozen are seen in the first and third round. They have white glasses, blue masks and armor, as well as spikes on their head.

The Cirrian Guard is seen in the first and third round. They have only one light blue eye, as well as dark purple-blue armor.

The Toxic 10 also seen in the first and third round. They have two white eyes, blue gas masks, and light green armor.

The Dozermen are seen in the second and fourth round. They have green eyes and orange, gray armor.

The Pyromaniacs are seen in the second and fourth round. They have a fireball head and orange-red armor.

The Plague is seen in the second and fourth round. They are black, gray and green armor with green eyes.

The Blind is seen in the third round and the semifinals. They have red or white masks on their head, covering their eyes.

The Tech Team is seen in the semifinals and the fourth round. They wear blue and white armor and they can heal themselves with the equipped Health Visor.

Death appears in the championship as the unbeaten champions. Their heads are skulls and they wear uncolored, metal armor. 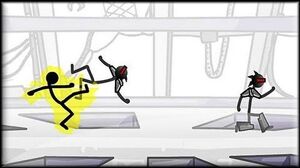