Destroy everything and stop the Applidrivers from entering the Net Ocean (failed).

Cometmon is one of the major antagonists in Digimon Universe: Appli Monsters, and is one of the underlings of the evil Leviathan.

Common is a colossal Appmon. He is a gigantic meteor-like Appmon that has rock-like skin on top of its body with three volcanoes with a dragon's head. Its lower part of its body is steel with a green floating ring.

Because of its gigantic size, it is able to destroy an Appmon island with its entire body.

After Mienumon was defeated by the Applidrivers, while they arrived at the gate to the Dark Net, Cometmon first appears when it was disrupting the wi-fi in the Real World as well as destroying the Review Island home of the Reviewmon and Kosomon. While the Applidrivers were their goal to unlock the door to the Deep Surface, a Reviewmon landed on them and told them that Cometmon destroyed their home. Haru then used the 7 Code Crowns to unlock and summon Dantemon.

As Cometmon approaches further, Dantemon immediately attacks the giant Appmon, only to be instantly eaten by him. The Applidrivers were sad that Cometmon won. But just as he was about to crush the Applidrivers, Dantemon destroys him from the inside, slicing him in half and exploded. 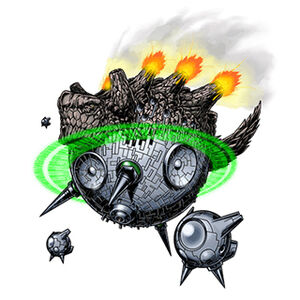 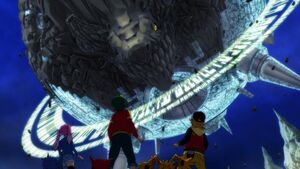 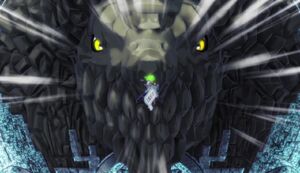 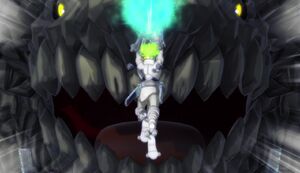 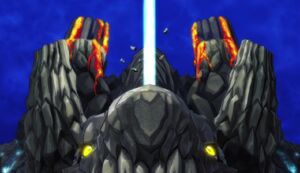