Commander of the Black Star

Commander Black, also known as the Black Directive, is the leader of the sentient Black Star and Saucer Beasts. He is the main antagonist of the final arc (Episode 41 to 51) of Ultraman Leo, taking over the role from the long-deceased Alien Magma after a long-time absence of the main villain for the series, and a posthumous antagonist in Ultraman Mebius.

Black is a sadistic alien invader coming from the sentient Black Star and uses Saucer Beasts to invade the Earth, starting a war against Ultraman Leo. He is infamous for orchestrating the total extermination of MAC (Monster Attack Crew) through his first Saucer Beast, Silver Bloome, making him the first and so far, the only villain who successfully eliminated an Earth Defense Team in the entire Ultra Series franchise.

His latest appearance is a minor character in Ultraman Orb and is less villainous. Although, due to being less threatening than his counterpart from Ultraman Leo and the lack of information, it is unknown whether Black in Orb was the original one in Leo or just another member of his kind, though the latter is more likely.

Commander Black is the leader of Black Star and its biological weapons known as Organic Saucers/Saucer Beasts. In Episode 40, he came to Earth with his first Saucer Beast, known as Silver Bloome, to make it attack the Space Station of the Monster Attack Crew, killing most of its members except Dan and Gen, and swallowed the entire Space Station. After eradicating MAC, Commander Black went into the city and summoned Silver Bloome to kill citizens and rampaged inside the city, killing many victims (children included) and caused the deaths of Takeshi Nomura, Momoko Yamaguchi and Kaoru Umeda, while Commander Black laughing madly at the mayhem until Leo destroyed the monster.

That was only the start of several attacks followed by his other Saucer Beasts, most notably Satan Mora, that lauched its aerial attack all across the city only to find Gen; and Nova, which brainwashed a child and spreaded toxic fume to make people gone insane, attacking each other in the process. Black Commander seems to have a taste over brutal kills since all of his monsters induced brutal and destructive attack (like Nova's insanity gas and Silver Bloome's caustic acid), and trying to break Gen/Leo's spirit either through brainwashing citizens into attacking him or with notions of harming children that bonded with Leo so that he would get him.

The most horrendous example of his heinous actions is shown in Episode 50, where he captured Leo with the help of Alien Bunyo, a humanoid Saucer Beast mercenary, having Leo trapped in his Ultraman form and shrunk down to human size, so that Commander Black could personally launch his torture on him. He managed to kill Leo through mutilating him with a JIGSAW, while laughing insanely as Leo was cut into pieces. Commander Black then sent Alien Bunto to reveal his monster form and went into a rampage, and if it wasn't Ultra King who resurrected Leo, humanity will be destroyed for real.

In the final episode, Commander Black sent his final monster, Black End, to attack Leo while holding the hero's young friend Toru hostage, so that Leo would be hestitated and got attacked by the monster. When the children that became Gen's pupil attack him to save Leo, Commander Black summoned the Black Star and tried to make it crash into Earth out of pure spite. Fortunately, Leo destroyed Black End and the Black Star via crushing Commander Black's crystal ball, as the vile alien finally perished in vain.

Thirty years after the death of Commander Black, the Saucer Beasts returned back to the Earth, started with the revived Nova, and later new types of Saucer Beasts known as Roberuga I & II created by Alien Empera, using fragments of the Black Star.

The second incarnation of Commander Black appeared as the main antagonist in the 22nd episode of Ultraman Orb, "The Unmarked Cafe".

Unlike his original incarnation, however, this version of Black was no longer bent on invading Earth after arriving on it. He abandoned his original goal of invasion and instead opened a Cafe for both aliens and inhabitants on Earth, alongside his own incarnation of Nova. Lamenting his guests diminishing and his coffee beans no longer available after hearing news about Dada's spaceship crashing, Black decided to close down his cafe and travel to another planet alongside Nova.

However, Nova transformed into its Kaiju form and silently encoraged its master to reopen their original plan, which Black was touched and complied. Revealing his true identity, Black took control of Nova and attacked the city before he was confronted by Orb, who kept referring Black as the owner of the cafe, as he and the SSP members begged Black to stop. Black refused to be called that and continued to fought Orb inside Nova. Still, Black met his defeat after Nova was destroyed by Orb.

Afterwards, Black silently mourned his best friend on the street and was comforted by Gai. Black told Gai in sorrow that without his companion, he now no longer had a dream to accomlish anymore, but Gai revealed that there were still people out there who loved Black's coffee, which Gai himself also praised. Deeply touched, Black left and presumably decided to move on.

Being one of the darkest villains in the entire Ultra Series, Black is a sadistic, brutal, and horrendous villain whose onscreen villainy exceeds that of other Leo villains including Alien Magma and Alien Babarue.

Black shows no empathy towards humanity, even willing to use and murder children, turning people against Leo in the process, in order to get on with his plans, and he prefers to execute mass destruction throughout the city only having Leo killed, thus getting the Earth rid of its protector and can start his total invasion upon Earth. He is also shown to exhibit a sadistic glee while chopping Leo alive through a jigsaw. 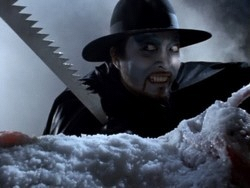