Carrying out missions assigned to him by Skull.

Commander Fuerge, named Commander Farej in the English dub is a Black Ghost operative tasked with accelerating the war in Muamba so Black Ghost could make a fortune selling weapons to both sides. He appears as an antagonist in several Cyborg 009 episodes.

After Cyborgman #1 escorted Unbaba into a bunker, Farej summoned a projection of Skull, who offers to supply Unbaba with powerful weapons to defeat the rebels. After Unbaba leaves to see a demonstration, Farej talks with Skull about their true plans: to escalate the war over Metal X in Muamba to a global one.

Farej later watches with Unbaba and Number One as Black Ghost tanks destroy a rebel village. However, the 00 cyborgs appear and disable the tanks. Unbaba becomes angered at Farej, but Farej punches Unbaba and orders the Cyborgmen piloting the tanks to destroy the cyborgs. When the cyborgs defeat the cyborgmen, too, Farej dispatches Cyborgman #1 to eliminate the cyborgs.

Number One captures Cyborg 008 and brings him to their base, where Unbaba tortures him. Farej stops Unbaba eventually, saying they need 008 alive to catch the other cyborgs.

Farej lures the 00 cyborgs into an electrical charge, disabling them. However, Cyborg 009 is able to overcome the charge with his acceleration mode and destroy the devices generating the electricity. Farej decides to retreat. Unbaba attempts to follow, but Farej knocks him out with a blow to the head.

Second Encounter With the 00 Cyborgs

Skull later contacts Farej and offers him the chance to redeem himself by killing the 00 Cyborgs. Farej has his ship follow the Dolphin. As the ship descends into the sea, Fuerge orders his men to drop depth charges into the ocean, which cause damage to the Dolphin. Upon hearing that the cyborgs' ship is going lower, Farej simply has his men drop in more depth charges.

Eventually, Farej's crew loses sight of the ship. Farej orders his men to deploy sensors into the ocean in order to re-locate the ship. The commander later catches sight of Cyborg 002, who was performing reconnaissance to see what the 00 cyborgs were up against, and orders his men to blow 002 out of the sky. However, 002 shoots the turrets on Farej's ship, forcing Farej to send missiles after him. One of the missiles splits into dozens charges, allowing it to land a hit on 002. Farej congratulates his men on the attack, but is soon informed that another target was surfacing rapidly. This target was Cyborg 008, who catches 002 and brings him back to the Dolphin.

After the Dolphin flies out of the water and fires at his ship, Farej orders the deployment of Hydra-G. Despite one of his men saying that it's still being tested, Farej sends it out anyway. The Hydra-G latches itself onto the Dolphin and deploys a wave that neutralizes the cyborgs. Farej has the Hydra-G bring the Dolphin back to his ship and sends in a squad of Black Ghost soldiers to inspect the ship. The squad reports that the 00 cyborgs are dead. Proud of himself, Farej and his crew fly back to Black Ghost's headquarters.

However, an explosion occurs as they are docking. It soon turns out that the explosion was caused by the 00 cyborgs, who managed to avoid death thanks to 001 using his psychic powers to shield the blast. Farej crawls out of his ship, but is soon confronted by a hologram of Skull. Farej pleads with Skull for another chance, but Skull vaporizes Farej for his failures. 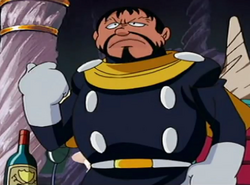 Fuerge's mechanical hand.
Add a photo to this gallery
Retrieved from "https://villains.fandom.com/wiki/Commander_Farej?oldid=2639478"
Community content is available under CC-BY-SA unless otherwise noted.