Commander Kaagh, also called "Kaagh the Slayer", is an antagonist in Doctor Who. He was attached to the Tenth Sontaran Battle Fleet's Special Assault Squad. He was the lone survivor of a failed invasion of Earth by the Sontarans. Also, he was the first Sontaran to be known to act on the behalf of another species, serving the Bane as a mercenary he appears two episode of The Sarah Jane Adventures The Last Sontaran and Enemy of The Bane.

Kaagh was the only survivor of the Tenth Sontaran Battle Fleet after their ship was destroyed by Luke Rattigan.

Determined to avenge his fallen comrades, Kaagh chose to istract Professor Nicholas Skinner and his daughter Lucy. He put them under his control with neural control implants and wanted the Professor to act solely on his orders, while Lucy would be a sleeper agent to help him infiltrate potential enemies who might stop him.

Not wanting to return to his home planet Sontar out of shame, Kaagh served as a mercenary to the Bane. They had found the consciousness of Horath and used Kaagh as a go-between for its transportation from planet to planet. A few weeks later, Kaagh encountered a female Bane known as Mrs Wormwood, who had been cast out by her people. Mrs. Wormwood convinced Kaagh to help her control the universe rather than serve the Bane.

Mrs Wormwood traveled to Earth, closely followed by Kaagh, who came in during a siege by the Bane Kindred. He found Mrs Wormwood and killed her attackers. They stole Luke Smith (who had been created by the Bane) and the Tunguska Scroll, which would show them where Horath was buried. Luke escaped, but Kaagh caught him. However, Mrs Wormwood was growing tired of Kaagh in the end, he betrayed her and his Sontar when he pushed Mrs Woormwood in the portal. 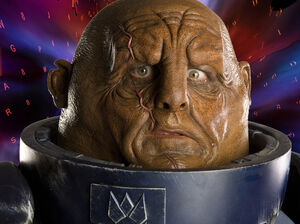 Retrieved from "https://villains.fandom.com/wiki/Commander_Kaagh?oldid=4270627"
Community content is available under CC-BY-SA unless otherwise noted.