Images and videos of the treacherous and megalomanical military officer Commander Rourke from Disney's Atlantis: The Lost Empire. 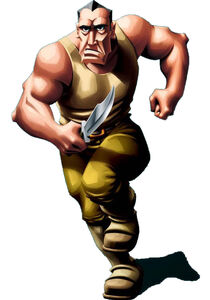 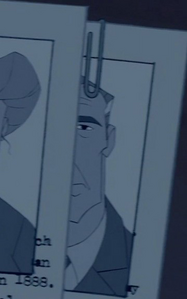 An easy-to-miss foreshadowing of Rourke's true role in the film, indicating that he is two-faced.

Commander Rourke and his crew retrieving the Shepherd's Journal from Iceland.

"Milo Thatch. Pleasure to meet the grandson of Old Thaddeus."

(Milo: This'll be a small change compared to the value of what we're gonna learn on this trip!) "Yes, this should be enriching for all of us."

"Lieutenant, take her down!"

"Alright, everybody, I want you to give Mr. Thatch your undivided attention!"

"Looks like all our chances of survival rest with you, Mr. Thatch. You and that little book."

Rourke scowls in annoyance at Milo fidgeting with a truck's horn.

So he grabs the horn and breaks it with his strong grip.

"I'm gonna kill him..." Rourke annoyed when Milo wakes him up for the fire.

"Alright, who's not dead? Sound off."

"We are explorers from the surface world."

"Squad B, head back to the shaft and salvage what you can. We'll rendezvous in 24 hours."

Rourke being annoyed at Milo for taking pride of the successful discovery of the lost city of Atlantis.

(Helga: Someone's having a good time.) "Like a kid at Christmas."

(Helga: Commander, there weren't supposed to be people down here. This changes everything!) "This changes nothing."

"Your Majesty, on behalf of my crew, may I say it is an honor to be welcomed to your city."

"We are peaceful explorers. Men of science."

"If he's hiding something, then I wanna know what it is." (Helga: Someone needs to talk to that girl.)

"Good man, Thatch. Thanks for volunteering." Rourke selects Milo (who hasn't been paying attention) to talk to Kida.

Rourke with the crew armed with guns, revealing his true nature.

Rourke pulls out the missing Journal page to confirm Milo's suspicions of his plan to steal the Heart of Atlantis.

"Yeah, about that, I would've told you sooner, but it was strictly on a need-to-know basis."

"I prefer the term 'adventure capitalist.'"

"Besides, you're the one who got us here."

"You led us right to the treasure chest."

(Milo: You don't know what you're tampering with, Rourke!) "What's to know? It's big, it's shiny, it's gonna make us all rich!"

(Milo: "That crystal is the only thing keeping those people alive! You take that away, and they'll die!")

"Helga, what do you think?"

(Helga: Knowing that, I'd double the price.) "I was thinking triple."

(Milo: Rourke, don't do this!) "Academics. You never wanna get your hands dirty."

"If you gave up every stolen artifact from a museum..."

"We're just providing a necessary service for the archeological community."

"Do yourself a favor, Milo, don't be like him."

"For once, do the smart thing."

"I really hate it when negotiations go sour."

"You're not applying yourself, son! There's gotta be something else!" (Milo: Well, there isn't! It just says "the Heart of Atlantis lies in the eyes of her king.")

"Well, then maybe Ol' King Cole here can help us fill in the blanks."

"How 'bout it, Chief? Where's the Crystal Chamber?" (King Nedakh: You will destroy yourselves!)

"Maybe I'm not being clear."

Rourke punches the King in the chest, mortally wounding him.

(Sweet: Rourke, this was NOT a part of the plan!) "The plan's changed, Doc. I'd suggest you put a bandage on that bleeding heart of yours. It doesn't suit a mercenary."

"Well, as usual, diplomacy has failed us."

Rourke suddenly stops and looks at the Shepherd's Journal.

He looks at the spiral-like symbol on the book's cover...

...then at the shame shape formed by stones at the surface of the pool overlooking the throne room.

"'The Heart of Atlantis lies in the eyes of her king...'"

Rourke and his men approaches the center of the pool.

Rourke stands on the symbol.

The platform begins to shake beneath his feet.

Rourke kicks a pebble into the water.

Rourke, Milo and Helga watch as Kida becomes infused with the Crystal.

"Get off your soap box, Thatch."

"We're just helping it along."

"I know I'm forgetting something."

Rourke punches Milo in the face.

Rourke crushes the framed photo of Milo and Thaddeus with his boot.

"You were the man who discovered Atlantis..."

"We're this close to our biggest payday ever..."

"...and you pick now of all times to grow a conscience?!"

Rourke detonates the bridge to prevent Milo and the crew from following him in an attempt to stop him.

Rourke stands triumphantly as he creates a hole at the top of the volcano to make his escape.

"We've got company!" Rourke and the soldiers seeing that the crew are coming in flying fish-mobiles to stop them.

Rourke climbs up a ladder to make his escape.

Rourke firing his bazooka at the heroes.

Vinny shoots the bazooka out of his hands.

(Helga: That's it. Unless someone wants to jump.) "Ladies first!"

Rourke betrays Helga by throwing her off the blimp to lighten the load.

Helga swings from the railing and jumps back in and kicks Rourke in the face for his betrayal.

(Helga: You said we were in this together! You promised me a percentage!) "Next time, get in writing!" (tosses Helga off again)

They both fall off the upper deck.

The two fight each other as they slide down on one of the ropes.

They land on a platform above the spinning propellor blades.

"You're a bigger pain in the neck than I would've ever thought possible!"

Milo charges at Rourke and raises his fist to punch him.

...and he slams Milo's own fist into his face.

Then he kicks him to the edge.

"I consider myself an even-tempered man. Takes a lot to get under my skin."

Rourke horrified to see his blimp is descending in flames, thanks to Helga's flare gun as revenge of his betrayal against her.

Rourke's evil grin as he loses his sanity and prepares to kill Milo with a fire axe in revenge for foiling his plot.

Rourke grabs Milo to finish the killing blow on him.

...when Milo slashes his arm with a crystal shard.

Rourke shrieks as the crystal essence engulfs his whole body.

Rourke as a crystalized behemoth.

Rourke revives and lunges at Milo.

Milo hoists Rourke up to the blimp propellers.

Rourke is hit by the propeller blades and is literally shattered into a million pieces.
Add a photo to this gallery 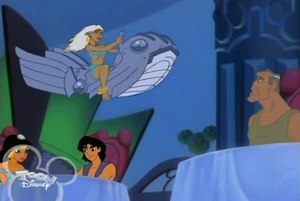 Rourke and Kida's cameo in House of Mouse.
Add a photo to this gallery 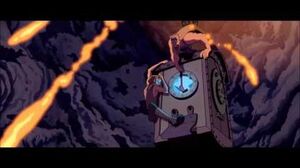 Atlantis The Lost Empire 2001 Scene "Nothing Personal" Rourke's Death
Add a photo to this gallery
Retrieved from "https://villains.fandom.com/wiki/Commander_Rourke/Gallery?oldid=3596702"
Community content is available under CC-BY-SA unless otherwise noted.