Supreme Commander of the TRF (formerly)

Soldier of the U.S Army

Wipe out every single Transformer hiding on Earth at any cost regardless of faction including their human allies (formerly, abandoned).

Help Cade Yeager and the Autobots to save the world from the collision of Earth and Cybertron (succeeded).

Commander Santos is a major antagonist turned anti-hero in the 2017 film Transformers: The Last Knight. He is the leader and top commander of the TRF.

He was portrayed by Santiago Carbera.

Santos is the leader of the TRF and a former Delta Force Operator who was born in São Paulo, Brazil and grew up in Phoenix, Arizona. Like Harold Attinger, Santos was first ruthless about the Transformers, both Autobots and Decepticons as he believes them to be a threat on Earth. But in his eyes he thinks what he does is right, indeed, he ordered an airstrike to kill Canopy in order to protect Izabella and the other children present in the forbidden area of Chicago. He is also ruthless with humans as well as his own soldiers, indeed, after Bumblebee killed some of his men in order to save Cade Yeager and also when he tried to kill him using TRF drones after Dinobots destroyed the military convoy.

However, unlike Harold Attinger, he redeemed himself and changed his opinion when he allied with Cade and the Autobots in order to save the world from Quintessa and the Decepticons. He and the his soldiers tear the TRF badges out of their suit to make it clear that they no longer posed a threat against Cade and the Autobots.

Santos was first shown when Edmund Burton narrates on how Transformers have been declared illegal on Earth and the TRF has been formed to wipe out every single Transformer. Santos then led the TRF on a mission to Chicago when drones detected Transformers there, including a bunch of kids who have been forbidden to enter the site. However, drone sentinels were destroyed by Izabella and her friend Sqweeks to protect the children and they were protected by Canopy, an Autobot hiding in a pile of rubble. Santos then witnessed the encounter via drone, and believing that Canopy was a Decepticon harming the children, he ordered an airstrike that resulted Canopy being killed, not knowing that he was putting Izabella and the orphans in danger. Santos and his men began to move out to "extract" the kids along with Izabella, though they escaped with the help of Autobot symphathizer and fugitive, Cade Yeager despite Izzy's protests to help Canopy. Santos and his men encountered Cade Yeager and began to arrest him while the latter encountered a dying knight that gave him a talisman. Santos then told Cade where he's hiding the Autobots, but Cade refused to sell out his friends. Santos then told Cade that it was an "invasion" and that they are in charge when they wake up. However, Bumblebee arrived and went on a reassembling spree and killed many of his men, with Bumblebee's head attacking Santos' leg and Cade slammed one of the doors on him, before Bumblebee held him up. After he is dropped and spared, Cade then threatened to kill him while Santos told his men to kill Cade, until William Lennox arrived and encouraged him to stand down. Later, Hound arrived and threatened them with his Gatling gun, allowing Cade to ease the standoff. As Santos told Lennox on what side he's on since that the latter was a  Autobot ally, he ordered a TRF sniper to fire a tracking device on Bumblebee.

He later followed Megatron's Decepticon team into another mission to Cade Yeager's junkyard and pursued the Autobots when they beat it out of there, so Megatron and his team can receive the talisman Cade found earlier from a dying knight. Cade, Jimmy, and Izzy then began to hide in a abandoned town after they have been forced to evacuate their junkyard thanks to the tracking device set on Bumblebee. The TRF convoy began their move to the abandoned town, but half of the convoy was destroyed by Grimlock and Snarl, halting their advance. Santos then witnessed the encounter and, pushing Lennox out of the way after knowing his suspicions, decided to take matters in his own hands and launched a fleet of mini-drones to kill Cade Yeager. After Megatron and Nitro Zeus fled while Onslaught, Mohawk, and Dreadbot were killed by Drift, Bumblebee, and Grimlock respectively, the mini-drones began to chase Cade, Jimmy and Izzy as they fled to a abandoned church. The drones began to move on Cade as he began to kill them one by one with his gun. Santos, watching the events live on camera, denounced Cade a "dead man" as the drones attempted to kill him, having begun his hatred due to his numerous escapes and presumably angered that his men have been killed. In the ensuing chaos, Jimmy, realizing that the drones only hunt down a target with facial recognition (which is Cade Yeager has he's branded a fugitive) began tricking a mini-drone to protect Cade, and instead of the drone killing him, it launched a bean bag at him while Cade destroyed the mini-drone as a distraction. Cade later encountered Cogman on a elevator, who had been sent by Edmund Burton since he was chosen as "the last knight", but a drone pushed him out of the way and destroyed a few of the remaining drones before destroying the mother drone, while the remaining two were shot by Crosshairs.

When British TRF forces, London Police and MI6 moved in to Edmund Burton's mansion to hunt down Cade, Santos and Lennox arrived in the Fifth Fleet of the US Navy in England to monitor the situation on their British counterparts. When it failed, Lennox and Santos organized a squad of Navy SEALS and TRF troops to pursue the HMS Alliance, which was being captained by Cade and Viviane Wembly. Arriving at the ancient Cybertronian ship, Santos's submarine was forced to use a narrow, perilous tube for entry after the gate closed behind Cade. He managed to make it in and engaged a knight who threatened Cade and Viviane. He then tried to convince Viviane to hand over the Staff of Merlin, only for her to turn the tables on them when she revealed she was the only one who could use it. However, they were interrupted by more Knights, who killed several Navy SEALs before a brainwashed Optimus Prime destroyed the knights and convinced Viviane to hand over the staff. Santos tried to shoot Optimus but deflected the shots and began confronting Bumblebee.

He rendezvoused with the rest of the TRF soldiers when the ship broke the ocean surface and they were provided with Ospreys to reach the ignition chamber after boarding the Knight Ship the Autobots were using as their main transport. He boarded the same Osprey as Lennox, Cade, and Viviane (and unknowingly Izabella and Sqweeks) and had a conversation with Cade. Having finally understood that his belief about all Cybertronians being enemies was the big tragic error, Santos and his soldiers removed the TRF badges from their uniforms threw them to the floor and and breaks the with TRF. Then the former TRF soldiers, Santos and Lennox reached the chamber and they targeted it with a nuclear strike after suffering many casualties during the final battle against the Decepticons and Quintessa. After the long battle, Optimus gave a speech before heading back to Cybertron using the Autobot Knight Ship. 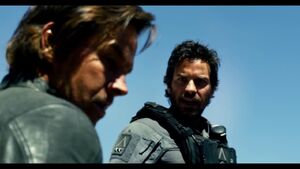 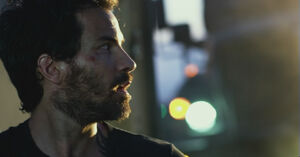 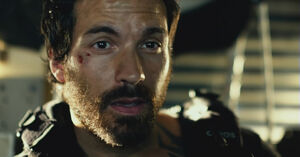 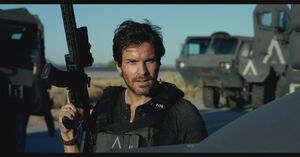 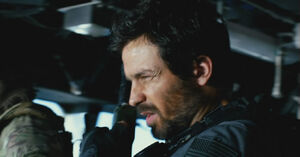 Santos on a US Navy ship, observing the TRF operation in UK. 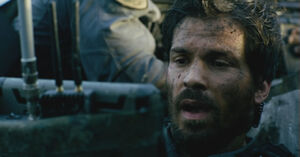 Santos wanting the missiles from the jets to hit the ignition chamber. 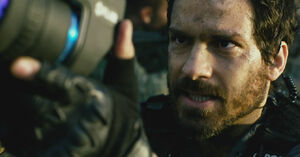 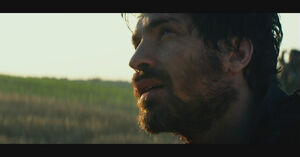