Turning subjects into his sludge.

Wipe the entire planet of its life and replace it with his own creations (failed).

Commander Tartar, also known as the Telephone for the majority of the game, is the overarching antagonist in the Splatoon video game series, serving as the main antagonist of Splatoon 2: Octo Expansion.

He is an ancient artificial intelligence who is the CEO of Kamabo Corporation, the boss of C. Q. Cumber, and the archenemy of Agent 8. He seeks to wipe out all the planet's life to remake it in his own image upon becoming disappointed in both the Inklings and Octolings.

Commander Tartar was originally created by a mysterious scientist to pass down the knowledge of humanity to the next dominant species on Earth after their extinction in hopes for them to not cause the next species to repeat the same mistakes humanity did. Despite originally seeing hope in the Inklings and Octolings, their ways eventually disgusted him enough to attempt creating a new dominant species, the Santized Octarians, and plot the existing Inkling's/Octoling's demise.

Commander Tartar introduces himself as a friendly telephone at the beginning of the game that guides Agent 8 through the Deepsea Metro, motivating the agent with an imminent "Promised Land" that Captain Cuttlefish deduces to be the Surface and Inkopolis. However, this is nothing more than a farce, as the "Promised Land" is, in fact, a giant blender that Tartar seems to use to murder Octolings and use them to create the "ultimate lifeform", which he wants to create after he wipes the world out. If his labeled number for Agent 8 is any indication (10,008), then it is possible that he could have blended up to 10,007 Octolings up until Agent 8 stopped his plans. This possibility is increased by the fact that he mentions Agent 8 was the test subject who came closest to stopping his maniacal plans.  Agent 8 and Cap'n Cuttlefish are saved from his trickery by Agent 3, the playable character from the original Splatoon, who is later briefly infected and brainwashed to do Tartar's desires. He had them fight Agent 8 before the latter broke Agent 3 out of it.

His fight is versus a giant statue of a human head he had turned into a weapon that vaguely resembled Julius Caesar. The machine was named “NILS”, meaning "end", indicating the reason for its existence. Although he tried to activate NILS' cannon, the machine is destroyed by Agent 8 and Off the Hook and with it, Tartar.

While disguising himself as the Telephone, he uses "cool" lingo for Agent 8's presumed comprehension. However, this is all a farce: he despises that lingo and is a cold, murderous and calculating machine. Tartar shows no remorse for attempting genocide on the planet: he despises all living species and treats them like objects. Unlike DJ Octavio, he is a dead serious villain at all times, and his plan is on the largest scale, and wouldn't have the largest body count, of any Splatoon villain thus far. The repurposing of the human statue into a weapon as well as the possible manipulation of over 10,000 Octolings suggests that he is also an extremely intelligent being. 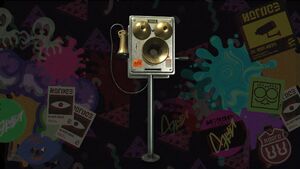 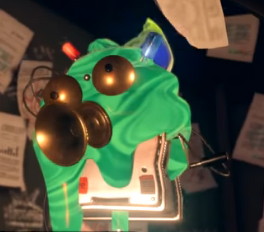 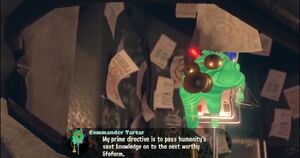 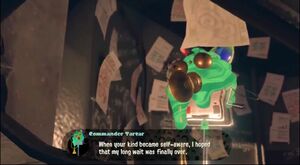 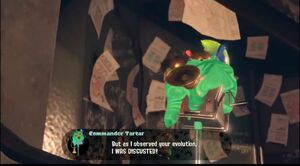 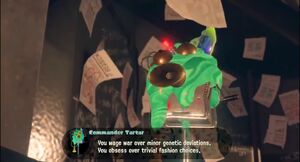 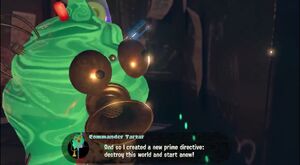 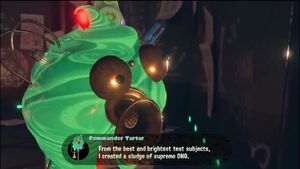 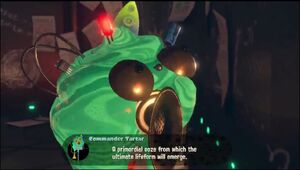 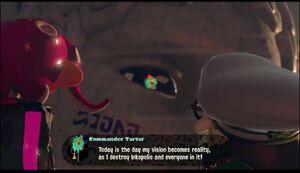 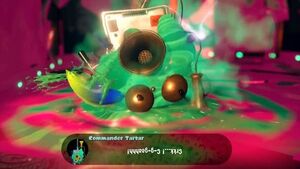 Commander Tartar's death
Add a photo to this gallery

Retrieved from "https://villains.fandom.com/wiki/Commander_Tartar?oldid=4374262"
Community content is available under CC-BY-SA unless otherwise noted.