The Commander of Darkness used centipede earwax to transform himself into Koala King and a potion to control a flock of dragons. 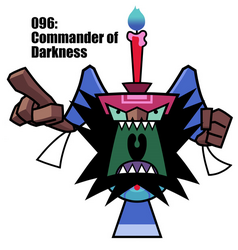