The Commando Elite are the main antagonistic force of the 1998 action-family film Small Soldiers. This group consists of about fewer than 10 members.

They were created by a toy designer named Larry Benson. The Commandos are lead by Major Chip Hazard and were designed to fight their enemies, the Gorgonites. However, they were manufactured in a greedy toy-company who accidentally planted a military-grade microchip into toy soldiers, creating rogue AIs (Artificial Intelligences) that think they are actual soldiers - Chip Hazard and his crew seem to have developed especially evil personalities that are somewhat of a parody on the heroic tough guy stereotypes seen in many action movies and also bear similarities to G.I. Joe.

At Alan's house, Irwin and Larry seek out Alan after monitoring a phone call from him about the dangerous nature of the toys. Chip attacks the house with an army of Commandos, equipped with large numbers of improvised vehicles and weapons and a battle breaks out between the Commando Elite and the humans inside.

During the battle, the humans realize they can fry the toys' chips with an EMP blast. Alan heads out to destroy a nearby powerline to overload it and create such a pulse; Christy, Irwin and Larry head to the Fimples' house to turn on all of the electronic items inside and wedge the power transformers open to reinforce the pulse. The normally peaceful Gorgonites then exit the house and fight back against the Commando Elite. Chip flies to the top of the powerline pole to stop Alan, where he briefly battles and defeats Archer. But just as Chip claims victory, Alan seizes Chip and jams him into the powerline, triggering an EMP blast which kills Chip along with all of the remaining Commando Elite and Gwendy toys (whom they conscripted) except for the Gorgonites who were hiding underneath a satellite dish to take cover.

Members of the Commando Elite 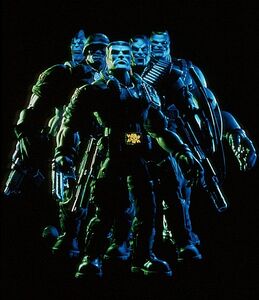 Retrieved from "https://villains.fandom.com/wiki/Commando_Elite?oldid=4135994"
Community content is available under CC-BY-SA unless otherwise noted.