Villains Wiki
Register
Don't have an account?
Sign In
Advertisement
in: Mature, Male, Call of Duty Villains,
and 19 more

Commissar Letlev is a Soviet character in the 2005 video game Call of Duty 2. He is a Russian officer tasked with training a group of new recruits for the Red Army.

Letlev only appears on the level "Red Army Training". He is the drill sergeant for the 13th Guards Rifle Division. He supervises target practice and orders the soldiers to throw potatoes at several targets instead of real grenades. His reason for this is that real grenades are worth more than the troops. He also supervises the recruits practicing melee attacks on dummies.

After the training, the player follows Letlev to a building to interrogate a captured German. The German tells Letlev about an oncoming German attack to try and avoid execution, however Letlev kills the prisoner anyway after sending the player to fight the Germans.

Letlev is last seen at the end of the level, having successfully beaten the Germans and sending the recruits into battle. 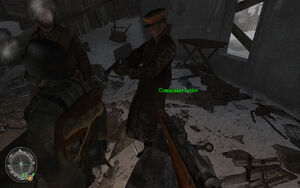