Villains Wiki
Register
Don't have an account?
Sign In
Advertisement
in: Mature, The Godfather Villains, Mobsters,
and 10 more

Power to either approve or remove a Don from power

Settle disputes and to approve new members, caporegimes or bosses.

The Commission was the governing board of the Mafia as it existed in the United States. It is portrayed in The Godfather films, novels and games.

Founded by Vito Corleone in the 1930s, it oversaw all Mafia families and activities in the United States.

By the late 1940s, the Commission was composed of the Five Families of New York; the Corleone, Barzini, Tattaglia, Cuneo, and Stracci families. In addition the New Orleans, Detroit, and Cleveland based Mafia families also sat on the Commission.

In 1948, Vito Corleone attended a meeting of the Commission after the murder of his son Sonny. Emilio Barzini took the role of presider over the meeting and acted as mediator between Corleone and Philip Tattaglia. Realizing that all of the families were arrayed against them Corleone agreeded to share the political influence his family had with the others to support their drug trade. He and Tattaglia ended the war that had existed between them, with Corleone swearing he would not be the one to break the peace. He was then able to bring his son Michael Corleone back home to the states.

After Vito Corleone died of a heart attack in 1955 Michael took his revenge on the Tattaglia, Barzini, Stracci, and Cuneo families by having the heads of those families assassinated. As a result of these assassinations the Commission soon reformed with new members. The Chicago outfit gained a seat on the board. Corleone ally Osvaldo Altobello took over the Tattaglia family and gained their seat on the Commission.

In the 1970s Michael Corleone tried to make his family legitimate by focusing on legal endeavours and selling off their interests in the casinos. Corleone still held a great deal of influence on the Commission and was able to block Joey Zasa from being promoted to a seat on the board. Corleone did note that he was having trouble with the Commission, and his nephew Vincent Mancini's feud with Zasa wasn't helping matters.

Corleone met with the Commission in 1979 in an Atlantic City, New Jersey hotel along with his nephew Vincent Mancini and his bodyguard Al Neri. During the meeting Zasa attacked the meeting by having his people shoot at the room from a helicopter with machine guns. Altobello, Corleone, Neri, and Mancini were the only people to survive. It was later determined that Altobello had Zasa stage the assassination attempt to kill off the dons and in particular eliminate Corleone.

The stress of the massacre and other situations led to Corleone suffering a diabetic stroke not too long afterwards. While he was incapacitated Connie Corleone gave approval for Neri and Mancini to carry out a hit on Zasa. Connie later poisoned Altobello while attending an opera in Sicily.

The Five Families were the primary American mafia families in The Godfather novel and movies.

The Five Families were composed of the Corleone, Barzini, Tattaglia, Cuneo, and Stracci families. These families were descended from New York City street gangs. In the early 1930s Vito Corleone helped formalize the organization of the mafia families in the US. He and the heads of the other four families created the Commission, which served as the overall governing body of the American Italian mafia organizations.

These men lead the Five Families during the late 1940s and early 1950s. 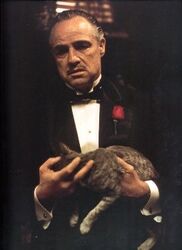 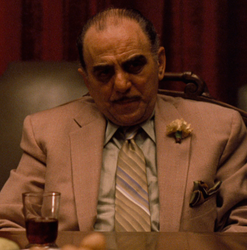 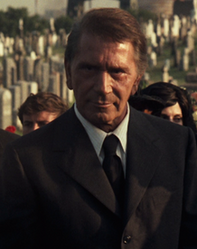 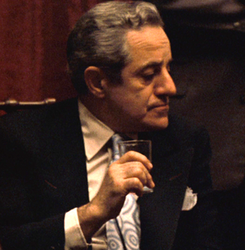 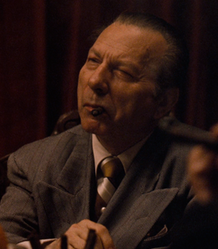