Prince of the Roman Empire (until he killed his father)

Emperor of the Roman Empire

Being acclaimed and loved by his people.
Watching gladiatorial battles.

Kill his father and take his place as the Emperor of Rome (succeeded).

Kill Maximus Decimus Meridius (succeeded, though after Maximus killed him first).
Receive admiration from his people and consolidate his rule (failed).

The only son of the Roman emperor Marcus Aurelius, Commodus is also the black sheep of his family: he is a cruel, ruthless psychopath who lusts after his own sister and thinks of himself as a god.

He was portrayed by Joaquin Phoenix, who also played Arthur Fleck in Joker.

After battling with the Germans for Emperor Marcus Aurelius, the general Maximus, weary of battle, decides to retire at his Spanish farm estate at the Emperor's behest, but the Emperor tells him that Commodus is unfit to rule and thus appoints him as regent to help save Rome from corruption. When Marcus Aurelius tells Commodus his decision, Commodus - who has always felt unloved and ignored by his father - flies into a rage and pulls his father's face against his chest, asphyxiating him to death.

After mourning his father's death, the new Emperor asks Maximus for his loyalty, but the general suspects foul play and refuses. Soon after, Commodus has Maximus arrested and orders him executed at dawn. Maximus manages to escape and makes the long journey to his farm on horseback, but arrives too late; Commodus' men have burned it to the ground and murdered his wife and son.

Meanwhile, Commodus returns to Rome to a cheering crowd and is met by his senators, who have grave concerns about his fitness to rule. Commodus orders 150 days of gladiatorial combat in honor of his late father. A few days later, Commodus watches as a troupe of gladiators fight in the Colosseum, depicting a battle between Carthaginian infantry and Scipio's legionaries. When the team portraying Carthage defy expectations and win, Commodus comes into the arena to personally congratulate them, along with his young nephew Lucius. The leader removes his helmet to reveal that he is in fact Maximus, alive and well, and vows to avenge his family by killing Commodus. As the Praetorian Guard prepares to kill him, the crowd chants "Live", so Commodus reluctantly allows Maximus to live.

Next, Maximus is pitted against the formidable Tigris of Gaul, an undefeated gladiator. After a fierce and lengthy duel, Maximus is able to gain the upper hand, but spares his opponent's life despite the crowd's urging that he kills him. Angered, Commodus berates him, even taunting him with harrowing details of his family's death. Undaunted, Maximus turns around and walks away. This act of defiance, along with his victory over Tigris, makes him more popular than the Emperor himself.

Commodus' sister Lucilla and the chief senator Gracchus secure a meeting with Maximus, and he obtains their promise to help him escape Rome, rejoin his soldiers, topple Commodus by force, and hand power over back to the Senate. Commodus suspects Lucilla of betraying him and threatens to kill Lucius unless she tells him about the plot. He then dispatches his men to arrest and/or kill the conspirators. Gracchus is quickly apprehended, while a contingent of Praetorians is sent to Maximus' quarters. Maximus reaches the rendezvous point but falls into a trap; his ally Cicero is killed and he is captured.

Jealous of Maximus' growing popularity, Commodus challenges him to a duel in the Colosseum. Before the fight, he stabs Maximus on the side to put him at a disadvantage. During the fight, however, Maximus manages to evade Commodus' blows and disarm him. Commodus orders the Praetorians to give him a sword, but they rebel against him and stand aside, having felt disgusted at Commodus for injuring Maximus beforehand to cheat. He produces a hidden stiletto, but Maximus turns the blade back into his throat, killing Commodus and bringing his short-lived reign of terror to an end, while at the same time avenging the deaths of Marcus Aurelius, Maximus' family, and all of the people who were killed or ordered to be killed by Commodus.

Shortly afterward, Maximus succumbs to the wound inflicted by Commodus and passes away on the arena, joining his deceased wife and son in the Elysium, but doesn't succumb before asking for the political reforms that Marcus Aurelius had wanted, allowing Rome to carry on their previous Emperor's legacy instead of Commodus. As for Commodus' corpse, no one approaches it after the fight and instead they all take Maximus' body away to bury him as the hero he was, further showing that Maximus will be remembered as a hero who saved Rome and more popular than the nefarious Commodus, ruining his image and legacy.

Commodus is cruel, ruthless, and power-hungry; his only real ambition is to be worshipped by all of Rome as a god among men. His own father, Marcus Aurelius, sees that he "is not a moral man" and thus largely ignores him, and is determined that he never becomes Emperor.

Maximus is the son that Marcus Aurelius truly wanted, and Commodus is very aware of it. Commodus constantly tries to ruin the image of Maximus, putting himself in danger and sacrificing other people's life as a cost. But during the film, Commodus began to show his true reason about destroying Maximus' image. Which he nearly did by ruining Maximus life. He really saw why Marcus Aurelius preferred Maximus over him; Maximus was loyal, brave, rational, careful and strong, while Commodus was dishonorable. His cheating ways got the best of him before and during the final fight with Maximus. He wounded Maximus before the fight since he was afraid that otherwise Maximus would quickly kill him. Also, after Maximus disarmed him during the fight, Commodus was too afraid to recover his own sword and started desperately ordering Quintus and other Praetorians to give him another sword which he didn’t get.

As for his relationships, the only people he ever loved were his father and his sister, Lucilla. But after all the love for his sister began to turn into an insane dominance, lust and an incestuous relationship, after that and knowing that her brother was responsible for Marcus' death, Lucilla saw her brother as the monster he truly was. Even his love for his nephew became moot after he threatened to kill him if Lucilla refused to become his sex slave, let alone his attempts to mold his nephew into becoming as ruthless and cruel like him.

Some could argue that Commodus became evil because his father abused him. However, given that his father knew he wasn't an honorable man to begin with, this is highly unlikely. And also, when he lamented his father didn't love him, his father sympathized for him and even wanted to hug him before being strangled to death, showing he loved Commodus for all his faults to some extent.

Overall, Commodus's evil deeds far outweigh any tragic events that he experienced during his life. He is merely a monster who uses rejection as an excuse. Worse, he tormented his sister all because in his eyes, she was an object that had to love him the way he wanted her too.

Commodus' famous gesture he gives when deciding the fate of losing Gladiators. 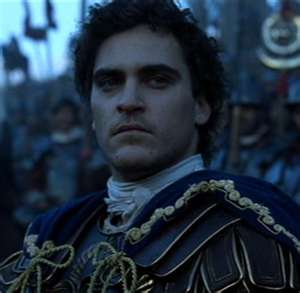 Commodus as a prince. 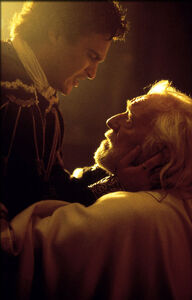 Commodus before killing his father. 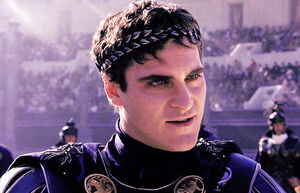 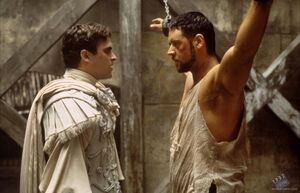 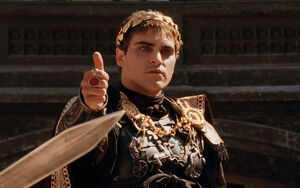 Commodus in the Colosseum. 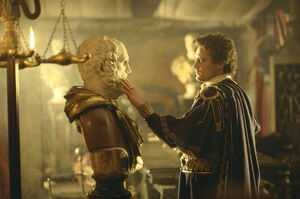 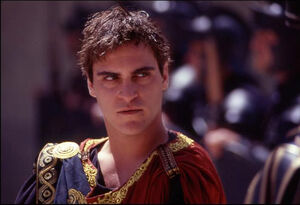 Commodus being killed by Maximus. 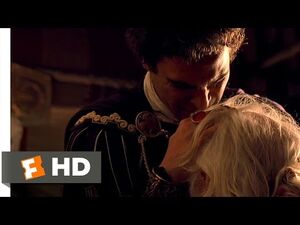 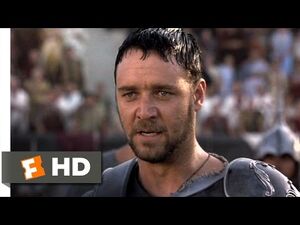 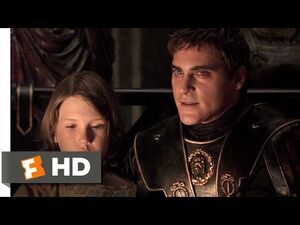 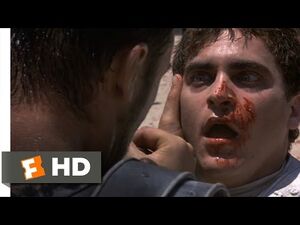