Manipulate Abel Magwitch into working with him (succeeded).

Steal Miss Havisham's fortune and emotionally ruin her (succeeded).
Find Magwitch and have him sent back to jail (succeeded, only to backfire on him).

Compeyson is the overarching antagonist in Great Expectations by Charles Dickens. He has very limited screentime, but his criminal activities ruined the lives of Miss Havisham and Magwitch, and they shaped most of Pip's life as a result. His actions are frequently told in narratives and seen in flashbacks.

An adept swindler, Compeyson enlists fellow criminal Abel Magwitch to help him in his crimes, and he and Magwitch become partners in the art of thieving; however, he takes advantage of Magwitch and pays him extremely poorly, and so Magwitch comes to deeply resent their partnership and what they do.

Compeyson is the one responsible for Miss Havisham's broken heart, as he was in league with her half-brother Arthur in a scheme to rob her of her fortune and leave her at the altar. Miss Havisham is devastated by his abandonment and spends the rest of her life mourning their supposed love.

Eventually, Compeyson and Magwitch are caught, but due to Compeyson's good education and clean record, he was punished much less severely than Magwitch, who had been caught several times before. From then on, he and Magwitch have been sworn enemies. Several years later, he catches Magwitch in a boat on the River Thames and attempts to arrest him. He and Magwitch struggle and they both fall into the Thames; while Magwitch manages to free himself from Compeyson's grip and swim to safety, Compeyson drowns. 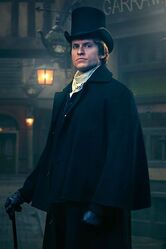 Compeyson in the BBC One drama series Dickensian.
Add a photo to this gallery
Retrieved from "https://villains.fandom.com/wiki/Compeyson?oldid=4282304"
Community content is available under CC-BY-SA unless otherwise noted.