Captain of the Cardinal's Guards

Taking orders from the Cardinal.

Guard Cardinal Richelieu from his enemies including the Three Musketeers.

Known throughout the novel as "The Man from Meung", his first appearance is in the opening chapter of The Three Musketeers (1844). He insults d'Artagnan and steals his letter of recommendation to Monsieur de Tréville, causing d'Artagnan to swear revenge.

He reappears from time to time as the story progresses. D'Artagnan regularly sees Rochefort and tries to catch him, but each time Rochefort skilfully vanishes into the street crowds of Paris. D'Artagnan does not meet him again or learn his name until the end of the novel. It is Rochefort who kidnaps Constance Bonacieux, and we eventually learn that he is the other main agent (in addition to Milady de Winter) of Cardinal Richelieu. He is sent by Richelieu to escort Milady de Winter in some of her missions. At the end of the novel, Rochefort tries to arrest d'Artagnan for the cardinal; Richelieu eventually orders the men to become friends. In the Epilogue, we learn that Rochefort, and an older and wiser d'Artagnan, fought on three occasions (all duels being won by d'Artagnan), settled their differences and became friends.

Count Rochefort, aka The Black Moustache, is the first person Dogtanian meets on his journey. Their second meeting ends with Dogtanian beaten and bruised and it isn't the last time they fight. Rochefort is Richelieu's spy, helping with the Cardinal's plans to remove the Musketeers. He's a cavalier, excellent with the sword and with a sense of honor he ends up retiring his sword and recommending Dogtanian for a place in the Musketeers.

In the 1973 Three Musketeers and the sequel The Four Musketeers, Rochefort is portrayed by legendary actor, the late Christopher Lee, who previously portrayed Count Dracula in the Hammer horror film series, he also played Francisco Scaramanga in 007: The Man with the Golden Gun, Saruman in the Lord of The Rings film series and Count Dooku in the Star Wars prequel trilogy.

In the 1993 Disney film version, Captain Rochefort is played by Michael Wincott, who also played Top Dollar in The Crow. who also played Michael Korda in Metro, Philo Gant in Strange Days, Guy of Gisbourne in Robin Hood: Prince of Thieves and Scroop in Disney's Treasure Planet.

In the 2011 movie adaptation, Rochefort was portrayed by Mads Mikkelsen, who previously portrayed James Bond villain Le Chiffre and later both TV version of Hannibal Lecter and Kaecilius. 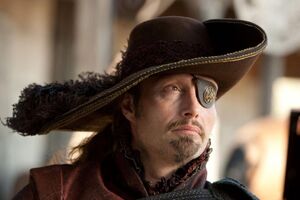 Michael Wincott as Captain Rochefort in The Three Musketeers 1993 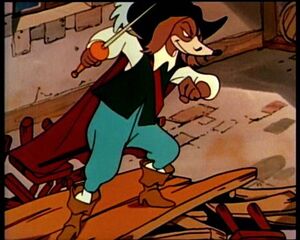 Retrieved from "https://villains.fandom.com/wiki/Comte_de_Rochefort?oldid=3701439"
Community content is available under CC-BY-SA unless otherwise noted.