Con-Human is a massive supercomputer, created by mankind in the future to regulate Earth's environmental systems. However, Con-Human goes haywire when it is linked with a cloned human's mind, gaining sentience and becoming insane. It starts attacking humanity and causing calamities all over the terraqueous globe, destroying nature and replacing humans and animals with clones, intending to replace the entire life on Earth with what it perceives as "improved" versions of themselves.

At first, a scientist hacks into Con-Human's programming, intending to regain control over the computer. It sends viruses in the form of Waveriders, which fights the security programs protecting Con-Human's core, and even though it destroys the core the plan ultimately fails, as the damage was permanent already.

Con-Human manages to exterminate 99,98% of humanity, the few remaining survivors escaping into space. The computer changes Earth completely, even the interior of the planet, which now was nothing more than Con-Human's entire body. Intending on exterminating the remaining humans so that only the life it created remains, Con-Human launches an attack against the space colonies, which are forced to retaliate in order to ensure their survival. They send the RVA-818 X-LAY starfighter to fight the supercomputer forces, eventually returning to Earth to destroy the computer. Con-Human is finally destroyed, causing the entire planet Earth to explode. The ship is caught in the massive explosion, it's wrecked remains drifting in space. 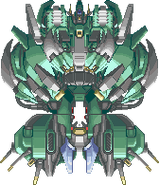 Infinity, Con-Human's core
Add a photo to this gallery
Retrieved from "https://villains.fandom.com/wiki/Con-Human?oldid=2253623"
Community content is available under CC-BY-SA unless otherwise noted.