The Con Man is an unnamed background character and a minor antagonist in SpongeBob SquarePants. He is an unnamed con artist, who tricks people into giving him money with various stunts that are just as clever and witty as they are absurdly over-the-top. He made his first and most iconic appearance in the episode "Chocolate With Nuts", where he famously tricked Spongebob and Patrick into giving him all their money three times in a row.

The con man made his first appearance in the episode, "Chocolate with Nuts", where he scams Spongebob and Patrick out of their money three times, The Con Man first cons them by saying that "only professional chocolate salesmen have chocolate bar carrying bags" and of course they need to have them. The second was that they needed "chocolate bar bag carrying bags" to hold all the bags they just bought, and of course they buy them. However, his most successful attempt was faking that he was "born with paper skin and glass bones and a disease" which impacted the duo heavily for two minutes and guilt them into buying chocolate bars from him to fund his medical expenses.

The con man made a return appearance in "20,000 Patties Under the Sea", where he once again, successfully conned Spongebob and Patrick into paying him to take their products. The con man, along with a female fish, who was either his wife or girlfriend, carried off their massive piles of money and Krabby Patties, as the con man said to them "Thanks again.", making a callback to him previously taking their money in "Chocolate With Nuts".

In "The Getaway", the con man ran a jewelry store. Spongebob went into the jewelry store to make a bunch of noises and morph his body into funny shapes, which caught the con man's attention. The con man watched in awe and amazement as Spongebob showed off his skills, while Stickyfins Whiting robbed his store. The con man later ran out of his store, exclaiming that he got robbed and overhearing him, Mrs. Puff joked to Dorsal Dan that she once went shopping there and got robbed, herself. This implies that the con man once conned Mrs. Puff out of a bunch of money when she went shopping at his jewelry store.

In "Broken Alarm", the con man worked as the cashier at Clock World. Spongebob went to the store to buy a replica of his old broken alarm clock but the con man told him that they no longer make that brand of alarm clock anymore and proceeded to show him all of the other kinds of alarm clocks they made. Indecisive, Spongebob bought out his entire store and gave him a giant pile of money. The con man cheered, took the money, and ran to a nearby yacht store to buy himself a fancy new yacht.

The con man is a purple fish with a brown fedora that has a red stripe on it, an orange vest, a white undershirt, a dark magenta tie, brown pants, and black shoes.

The con man is extremely snide, sneaky, impolite, deceitful, calculating, manipulative, and mendacious, as he's willing to go to ridiculous extremes to trick people into giving him money, even going as far as pretending he's a seriously injured man and creating an elaborate story just to guilt trip Spongebob and Patrick into giving him money. The con man is extremely witty and intelligent, thinking of several clever and foil-proof ways of suckering people of their money without ever getting caught or punished. 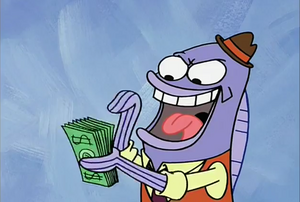 Retrieved from "https://villains.fandom.com/wiki/Con_Man_(SpongeBob)?oldid=3875833"
Community content is available under CC-BY-SA unless otherwise noted.