The Condiment King is a minor antagonist towards the superhero Batman, as well as Robin and Batgirl. He was originally created as a joke villain who appeared in Batman: The Animated Series, but was later adapted into the comics as well. Although his origins differ in both depictions, he is universally portrayed as a dimwitted criminal who uses condiment-themed weaponry.

In Batman the Animated Series, the Condiment King was a stand up comedian named Buddy Standler, who judged an annual stand-up comedy competition. He and his fellow judges rejected a comedian named Shecky Rimshot, who was really the Joker using an alias. A year later, Buddy took up the "Condiment King" alias and used ketchup and mustard sprayers to hold up a popular restaurant. After escaping with the customer's money and jewels, Buddy was quickly defeated by Batman, being hospitalized in the process. It was later revealed that the Condiment King, along with the other strange "villains", were brainwashed by the Joker using Mad Hatter's mind control technology, which resulted in him and the other two being freed of all criminal charges.

This Condiment King's real name was Mitchell Mayo, an obvious pun on mayonnaise. He was defeated repeatedly by Batgirl, Robin, Black Canary, and Blue Beetle. Like the television version, he was very weak and was more or less a comic relief character. He eventually became one of the many loser villains who joined General Immortus' army. He, along with several other villains, got power upgrades. His ketchup and mustard sprayers now shot corrosive acids. He is killed, however, by his teammate Human Flame by being choked to death with a ketchup bottle.

Mitchell Mayo has since been revived during DC Rebirth and appeared as one of the villains quickly defeated by Batman and Catwoman. He later traveled to Coney Island to assist the Penguin and other villains in their attempts to take control of the famous neighbor. However, they were foiled by Harley Quinn, and so Mitchell decided to go legit by opening his own restaurant.

The Condiment King appears as an ally of the Joker in the 2017 LEGO Batman Movie. After Joker reveals that the Condiment King is one of his allies, he assures the pilot he is talking to that Condiment King is real and "might be worth a Google". Towards the end of the film, Condiment King, along with Joker's other former allies, team up with Batman, Robin, Batgirl and Alfred to stop Joker and the Phantom Zone Criminals. 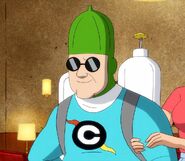 Retrieved from "https://villains.fandom.com/wiki/Condiment_King?oldid=4344853"
Community content is available under CC-BY-SA unless otherwise noted.