Leader of the Flame Keeper's Circle and the Esoterica

He was a wealthy and devoted follower of Dagon as well as the leader of the two cults of fellow Dagon worshippers known as the Flame Keepers' Circle and the Esoterica. He used to recruit celebrities for his group to attract more people.

In "The Flame Keepers' Circle", he believed that Vilgax was Dagon. He protected him at all costs.

In "A Knight to Remember", Conduit Edwards took Vilgax to the Dagon's heart. When Vilgax touched the sword within the heart and returned to his normal form, Edwards realised he had been tricked. He and his men attempted to retaliate but Vilgax took them out with a shockwave launched from his right arm.

Conduit Edwards reappeared in "The Beginning of the End". During the Coming of Dagon, Edwards tried to assassinate the Forever Knight leader Sir George, but his squire Winston took the fatal blow for George, killing himself. In vengeance for Winston, George stabbed Edwards through his stomach, killing him. His last words were "may Dagon curse you." 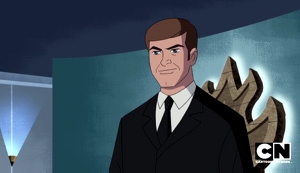