Assist Reiter in his plans (failed).

Conklin is a Shadowspire mercenary and the cruel main enforcer of Baron Reiter during his operation on Lian Yu. He is the secondary antagonist in the flashback storyline of the fourth season of Arrow.

He was portrayed by Ryan Robbins.

After Oliver Queen has seemingly joined Reiter's cause he guards the drug field, also guarding the slave workers. When one slave runs away, Oliver tackles him before another guard can shoot the man. Conklin then arrives and brutally hits the man in the face with his rifle, telling Oliver that this is the way he should act. While he and Oliver drag the unconscious worker back to the station Conklin tells Oliver that violence is the only thing the workers understand. When Oliver asks about the operation Conklin reveals that the plant on the fieds is a hybrid called Slam,one part heroin poppy and one part coca leaf. They are then disturbed when a guard arrives to report to Conklin that a whole Slam cake disappeared. Conklin deduces that the runner was only a distraction and orders his men to round up the workers.

After herding the workers together Conklin expresses his disappointment in the slave workers. stating that he now has issues trusting them. He points his gun at one of them and threatens to kill him unless the thief of the Slam turns himself in. When noone speaks up, Conklin executes the worker. When threatening to kill another Oliver volunteers to get the information out of them via torture to prevent another death. Conklin gives in.

During Oliver's torture of one of the workers, Conklin jokingly asks on which private school Oliver had picked that up. When the torture continues. When the true thief of the Slam gives herself up, stating that she stole it to treat wounded workers, Conklin plans to shoot her but Oliver convinces him that Reiter wouldn't be happy to hear that Conklin killed two of his workforce in one day. Oliver offers to take the woman into the woods and make her "disappear", stating that no one will find the body. Again, Conklin allows it but sends one of the guards with them.

In the woods, Oliver tricks Conklins guard to step on a landmine. After the guard is dead Oliver frees the worker. When Oliver returns to Conklin and tells him that the man stepped on the mine, Conklin doesn't believe him, stating that things turned out fine for months before Oliver showed up and two people stepped on a landmine in one week. Finding Oliver's behaviour suspicious he demands that Oliver leeds him to the body of the worker. On their way there he tells Oliver that he does not behave like someone who just killed his first person and deduces that Oliver is either lying oder a stone cold killer. When they arrive at the body and Conklin can't feel a pulse, he is satisfied and orders Oliver to get rid of the body.

However, on his way back Conklin finds Oliver's backpack hidden in the grass, He opens it and finds the communication device inside, including the messages Oliver got grom A.R.G.U.S. telling him to infiltrate Reiter's organisation.

When Oliver returns to base he is confronted by Conklin, who brings him to Reiter. However, Reiter does not believe Conklin when he states that OIiver is a traitor, instead chastizing Conklin for ignoring the external threats while on his which hunt. He shows them the captured John Constantine whom Reiter thinks to be spying on them. However, with magic Constantine is able to free himself, knocks out Conklin and flees the base with Oliver as a hostage.

After returning to Reiter with the orb from the location on Constantine's map, Oliver brings Reiter and Conklin back to the shrine. There, Reiter uses the orb to reveal a secret message on the walls which states that a special "gift" will be located at a cave surrounded by mountains. Oliver tells Reiter that he knows such a cave and Reiter sends him to lead an excavation. Conklin again tries to convince Reiter that Oliver is a mole but Reiter interrupts him and tells him to go with Oliver.

Conklin goes with Oliver but when Oliver, under the pretext of eating his lunch in peace, leaves the group to meet with the slam worker he rescued from Conklin previously, Conklin uses this to hire a worker named Vlad to attack Oliver on his return. Vlad indeed attacks Oliver but Oliver kills him by breaking his neck. Conklin then arrives, seemingly obnoxious, and states that he hopes that Oliver has a good reason for the dead body.

While bringing Oliver back to Reiter Conklin reveals that Vlad was the brother of Talana, the female worker Oliver saved. Back at the camp, Conklin and Oliver both accuse each other when they stand before Reiter. Reiter states that he has the means to find out who is guilty. He grabs a bunch of twigs, points them at Oliver's chest and asks him why he killed Vlad. Oliver tells him that Vlad attacked him. Reiter then points the twigs at Conklin and asks him if he set Vlad up to attack Oliver. Conklin denies it and the twigs rustle. Conklin is then taken by Reiter's guards and dragged outside while loudly claiming his innosence. Oliver asks Reiter what he will do to Conklin to which he replies that he will do nothing as he believes "the wronged should make things right".

Later that day, Reiter brings Conklin before the rest of the group, calling him a man who conspired against them and killed an innocent, useful worker. He tells them that the punishment will not come from him but from the man he tried to hurt. Reiter then hands Oliver a whip. When Oliver approaches Conklin, Conklin begs him not to do that. Oliver whips him nontheless, striking him multiple times.

When Oliver tells Talana about the death of Vlad, she vows to kill Conklin for it. Conklin later finds Taiana and Oliver Queen on the Lian Yu shore with Oliver having been injured by a shark while swimming back from the sunken Amazo ship. Conklin was stunned to see Taiana alive and said that not only was Oliver a spy, he was also a liar and he would enjoy tearing him apart. Vowing that Oliver won't lie himself out of the situation, Conklin brings Talana and Oliver back to camp. When Oliver, due to the shark bite, falls to the ground unable to walk further, Conklin tells him to get up again. However, after being told by Talana that he would be forced to carry Oliver should Oliver pass out, Conklin allows them a brief rest.

Back at camp, Conklin brings Oliver and Talana before Reiter, also showing Reiter the backpack with maps and Oliver's communication device. Convinced, Reiter gives Conklin permission to kill Oliver, taking the latter's betrayal at a personal insult, but Conklin states that he has something else in mind. As revenge for Oliver whipping him earlier, Conklin proceeds to whip Oliver.

However, while Oliver is whipped Reiter sees the tattoos on Oliver's body glowing and tells Conklin to stop. Conklin claims that Reiter told him that Oliver was his and he could do whatever he wanted with him, but Reiter says that this was before he saw the signs. Conklin states that Reiter can look at them all he wants when Oliver is dead but Reiter claims that he needs Oliver. Sensing the oppurtunity, Oliver grabs the gun from Conklin's holster, causing every guard to aim their rifles at Oliver. Conklin reminds Oliver that while he has one gun, they have five and asks Oliver where he wants to run. However, Oliver aims his gun at his own head, stating that he will be running nowhere. Oliver then claims that he will cooperate with Reiter, as long as Reiter ensures Talana's safety. Although Conklin claims that Oliver will turn on him again, Reiter accepts the deal. Oliver hands him back the pistol and Oliver and Talana to be brought to prison. When Conklin says that Reiter will regret this, Reiter coldly reminds him that no part in Reiter's plan requires Conklin to be alive.

Conklin then brings Talana and Oliver to a former chinese prison on the island. After putting them in a cell, he tells Oliver that Reiter will bore of him eventually, and that Conklin will wait until then.

A handcuffed Oliver is later brought before Reiter, who tells him that the map conceals deeper truths Reiter could not uncover until Oliver brought the survey maps to Reiter, and that he was able to decipher the encryptions on the stone which was also provided by Oliver. Reiter further claims that according to legend, in a hidden place on the island lies a device of great power. To find it, a man who has been granted passage by the gods is required and Reiter thinks that that man is Oliver. Conklin then appears in the room, claiming that Reiter is needed upstairs. Reiter tells Conklin to keep Oliver company.

Oliver uses the moment to steal a letter opener from Reiter's table and break his cuffs. He then grabs a razor blade. Surprised, Conkin draws a knife, claiming that he will enjoy watching Oliver die. Before they fight, Conklin claims that after Oliver is dead, he will gut Talana too. A violent fight ensues, which ends with Oliver stabbing Conklin in the chest with his own knife. With his last breath, Conklin claims that Reiter is going to kill everyone no matter what Oliver does, before falling to the ground dead.

A spiritual being that takes Conklin's shape is encountered when Reiter's worker break through the wall. The being threatens to kill everyone, causing Reiter and the Shadowspire soldiers to flee and lock Oliver inside the room with the being. Once Reiter is gone the being claims that Oliver is worthy to pass and dissolves. 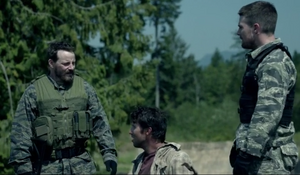 Conklin talks to Oliver about how to treat the workers 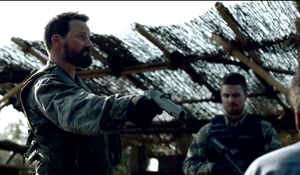 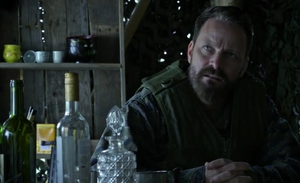 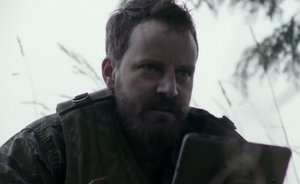 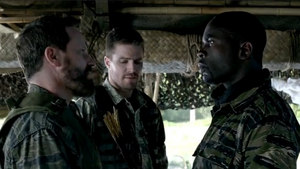 Reiter finds out that Conklin betrayed him 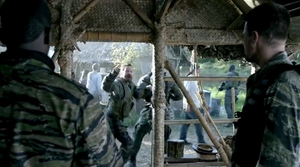 Conklin is dragged away after Reiter deems him guilty 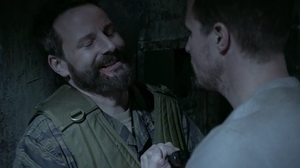