The Journey of Natty Gann

Innkeeper of the San Marco hotel

Have Natty taken away (failed).

Connie is the main antagonist of Disney's 1985 live-action film The Journey of Natty Gann, even though she only appeared near the beginning of the film. She is Natty's cruel guardian and the shallow and insensitive innkeeper of the San Marco hotel.

She was portrayed by Lainie Kazan.

Connie is first seen at her desk when Sol and Natty come by and Sol asks for ads. Connie makes up a sadistic joke about a golfer who was killed by lightning and laughs about it.

Sol arranges for Connie to look after Natty and promises to send bus fare for her in a few weeks. Sol then heads off to Washington to look for another job and Connie informs Natty about him being gone.

While Connie is singing a song, she catches Natty trying to leave and forces her upstairs. However, she leaves the hotel and comes across Frankie and his family being evicted. Natty gets involved and the police bring her back to Connie. The police informs Connie that she needs to head to court at morning and she scolds Natty. She orders her to have her puppy gone and threatens to make her scared as she locks her in her room. Natty unlocks herself from her room and overhears Connie reporting her as an abandoned kid. Natty escapes the hotel just as the authorities arrive to pick her up. Natty drops her puppy off at Sherman's place and sets off to find her father across the country.

When Natty's father calls Connie, she tells him Natty is gone. In a later phone call he is grieved to learn that Natty's wallet was found underneath a derailed freight train. Unbeknownst to him, she lived through the crash. Sol decides to take the most dangerous job possible and Natty, with the help of a wolf, manages to arrive at Washington and reunite with Sol. 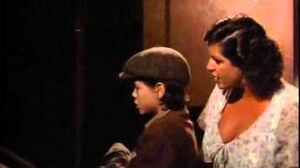 One spank - The Journey Of Natty Gann