Get revenge on Lois Griffin for expelling her and sending her to prison by framing her for her fake death (briefly succeeded; ultimately failed).

Constance "Connie" DiMico is an antagonist in Family Guy. She is the most popular girl and the head of the cheerleading squad of Adam West Regional High School.

She was voiced by Fairuza Balk (who also portrayed Nancy Downs in The Craft and The Craft: Legacy) in her debut episode and "Let's Go To the Hop", while Lisa Wilhoit voiced her later episodes.

Connie is the captain of the Adam West Regional High School cheerleading squad, the same school attended by Meg and Chris Griffin. She is one of the popular kids and is mostly seen with her closest friends: Gina, Scott, and Doug. Portrayed as being mean, cruel, and spoiled as she is attractive, Connie bullies unpopular students, with Meg being her favorite victim. The Griffins have also taken up for Meg on these occasions.

In the episode "Let's Go to the Hop", Peter, while disguised as "Lando Griffin" was fooled into going to the Winter Snowball with Connie, but dumped her in front of the entire school to make Meg feel better. In the episode "And the Wiener is...", Connie publicly humiliated Meg at her birthday party, persuading Lois to send Glenn Quagmire over to traumatize her with his lecherous advances.

In the episode "Barely Legal", Brian drunkenly confronts Connie after she picks on Meg, saying that she is cruel to others like Meg because it helps her forget that she sees herself as a whore, and will be so "used up" by age 19 that she will be reduced to "a worn out, chalky skinned burlap sack that even your step dad won't want". The insult hits so close to home that Connie runs away, crying.

Briefly in "Peter's Daughter", Connie makes a fat joke at Meg's expense that provokes Peter to brutally smash her head into a fire extinguisher, but in typical Family Guy "reset button" fashion, Connie is fully healed and back to her attractive self in future episodes. In "McStroke", Stewie Griffin tricks Connie into dating him only for her to find out he's a baby. Stewie yells out to the school that Connie made out with a baby, leaving everyone to think she's a pedophile, and she is last seen getting arrested. In "Stew-Roids" she dates Chris briefly. Originally this is a challenge she takes on to make him popular, but she soon develops true feeling for him and is fully willing to give her popularity for him and shows she is willing to change and embrace some new morals, possibly because she has been given true love towards her for the first time in her life. Later, Chris becomes egotistical from his newfound popularity and dumps her to gain a variety of girls, causing her to lose her popularity for a short time. It is possible that she still likes him, although this relationship is never mentioned again. She has dated all three of the human male Griffins, Stewie in "McStroke", Peter in "Let's Go to the Hop", and Chris in "Stew-Roids". Also in Stew-Roids, Peter had a strong attraction to Connie, and when she gets knocked unconscious by Chris and two other girls Peter says "Oh, Connie's hurt, I'd best lie on top of her to keep her warm." much to the disapproval of the party guests, only for him to break the fourth wall and say "What are you looking at? It's a cartoon!"

In "Dial Meg for Murder", Meg finally gets revenge on Connie, along with her friends by whacking her with a sack of unopened soda cans. After that, Meg french kisses her. In "Leggo My Meg o", Connie is picked as the captain for a dodgeball team during the girl's gym class and picks everyone for the team except Meg before she and the other girls ruthlessly pelt Meg with dodgeballs. In “Follow the Money”, her latest appearance in the show so far, she is shown as a stripper pole dancing at the local strip club. It seems that she fails to realize that being a bitch towards others causes her terrible comeuppance at the hands of the Griffin family as she learns nothing from them.

In "Follow the Money", Connie makes an uncredited appearance as a stripper.

In "Connie's Celica", when Lois becomes the new music teacher, she and Lois are at odds due to Lois trying and failing to act as an intimidating teacher. Later when Lois acts more passive and demonstrates how music can help illustrate a story or real-life scenarios Connie says "you suck" before throwing a tomato at Lois in front of the entire class humiliating her. As punishment Connie was given her third strike for the year and was immediately expelled from Adam West High. Feeling she deserves revenge against Lois, Connie starts making Lois' life miserable. She hacks Lois' Facebook page and makes racist and anti-veteran comments, labeling her a lesbian, and buying all of Lois' favorite paper towel brand that was in stock to "clean up the mess" she made, referring to Connie's expulsion which she still believes she didn't deserve demonstrating how delusional she is. At that point, Lois says that she didn't mean to get Connie expelled, but now she's glad that she did. Connie then goads Lois into threatening her which everyone in the store sees and records. Connie then uses this to her advantage by faking her death and framing Lois for it. She does this by killing a pig (later revealed to be the children's cartoon character Peppa Pig) and dressing it up like her. Her plan initially succeeded due to the fact the police coroner has a serious substance abuse problem. This results in Lois being briefly imprisoned until her deception was discovered when she was found at a motel. It can be assumed that Connie was arrested for framing Lois and her numerous offenses committed in the episode and hasn't been seen since.

In the Italian version of Family Guy, Connie DiMico is spelled Connie D'Amico, in order to make Family Guy names more local, although it's apparent Connie is Italian-American.

Connie is a blonde Italian American girl of Meg's age with red lips. From her debut appearance up until the seventh season, her usual attire was a black crop top, red pants, and black Mary Jane shoes. As of "Stew-Roids", her top is purple and her shoes are white. Her shoes appear to have gone back to being black in the episode "Trading Places", only to return back to being white in the episode "The Peter Principal". 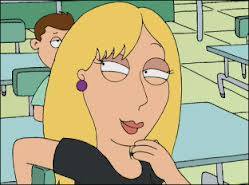 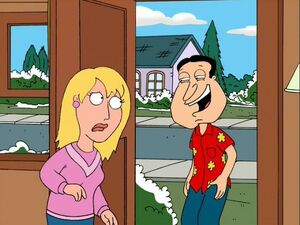 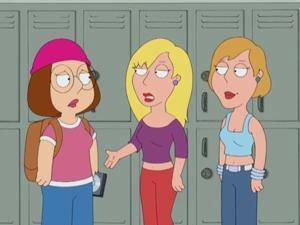 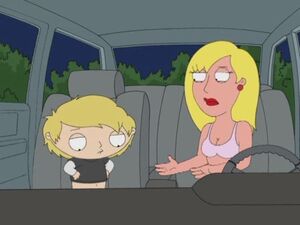 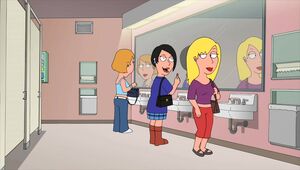 Connie and her friends. 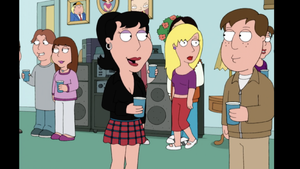 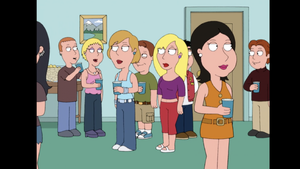 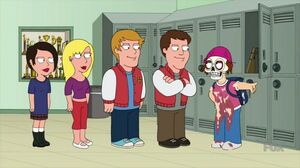 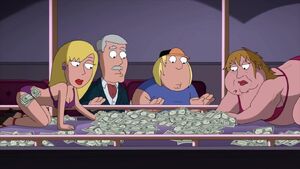