To help Dr. Brenner find both Eleven and The Monster (failed).

Murderous Spy
Agent Connie Frazier is the third main antagonist in the first season of the Netflix original series Stranger Things. She is a DOE agent working alongside Dr. Martin Brenner. Their primary goal is to find Eleven, the girl they kept prisoner until she escaped the lab.

She was portrayed by Catherine Dyer.

Frazier's early life is unclear but she worked for the government and alongside Dr. Martin Brenner on his investigations on The Upside Down which is the inhabitance of The Monster.

She first appears in episode 1 where Benny Hammond, a chef, and owner of Benny's Burgers, makes a phone call to Social Services stating that a young girl with a shaved head had wandered into his establishment, desperate for food. However, unbeknownst to Benny, Connie and her team intercepted the phone call. Believing that the young girl is Eleven, who they kidnapped 12 years ago to experiment on. Connie arrives and shoots and kills Benny. Her team tries to surround Eleven, but she uses her abilities to escape the restaurant.

She and Dr. Brenner later found out that Eleven was hidden with some young boys and call in for reinforcements, however, the children manage to escape.

Frazier later speaks with Mike Wheeler's parents and tells them that their son and his friends may be in danger.

Frazier appears in the first episode of season 1 when Benny calls Social Services to report the girl he found stealing food from his burger restaurant, after Benny takes care of Eleven and feeds her, the doorbell rings, Benny opens the door just to find Frazier posing as the Social Services agent. When Benny lets her enter Eleven had already left, knowing that something bad is about to happen. Frazier shoots Benny and poses his body as a suicide.

Her role in the series is small until Joyce Byers and Sheriff Jim Hopper are found in their facility. Frazier interrogates and tortures Hopper until he proposes a deal, where he and Joyce enter the other dimension in exchange for telling them where Eleven is hiding.

Hopper leads them to the High School where Mike, Eleven, Dustin and Lucas are hiding, when Dr. Brenner's team enter the High School, Mike's group start running away trying to find an exit but are soon cornered by Brenner team, and are surprised by Frazier who is pointing at them with her silenced gun.

Frazier and a number of government co-workers surround both Eleven and the boys however, she is able to use her power of biokinesis which then causes both Connie and the rest of the agents to freeze as their brains get crushed and their eyes began to bleed out completely and drop to the floor, killing her and the other government agents in the possession.

Following her demise, however, the blood from both Frazier and the other agents' bodies, summon The Monster to the high school, as the blood from the body's attracted it. 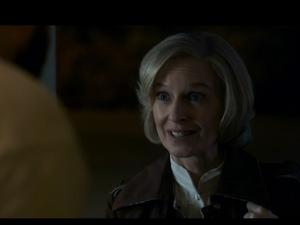 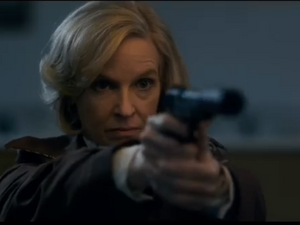 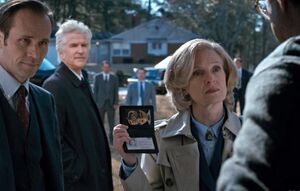 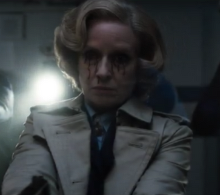 Connie as she bleeds to death. 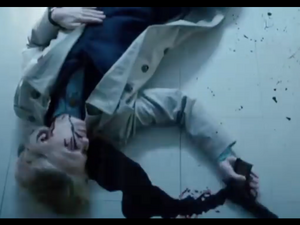