The Horseman of Apocalypse

Bring plague to modern era and brake his seal (failed)

The Horseman of Conquest (also known as The Horseman of Pestilence, by the residents of Roanoke), is the third of the Four Horsemen of the Apocalypse and a supporting antagonist in TV show Sleepy Hollow. He appears as a Japanese Samurai wielding a bow riding a black horse.

Prior to Season 4, his human avatar is yet to be revealed. However, in Season 4, Malcolm Dreyfuss had turned Logan MacDonald, a young socialite who appears to be taking orders from him into Conquest.

Conquest was first seen in a prophetic dream had by Ichabod Crane riding along side the other three horsemen.

Conquest's first physical appearance was when he was chasing Thomas Grey into Sleepy Hollow in order to spread a plague through modern-day Sleepy Hollow that he had placed on the people of the Colony of Roanoke centuries ago. After Abbie Mills and Ichabod Crane discovered the survivors of Roanoke and the plague, they learned of the Horseman (known as Pestilence and identified as Conquest by Ichabod) and his goal to enter their realm through his plague in order to join up with Death. Later, the Horseman tried to stop the two from healing Thomas of his plague as it would make him unable to manifest a physical form in the real world. Despite his efforts, Ichabod and Thomas were healed of the plague, causing Conquest to dematerialize into dust as he was making a charge towards Abbie.

In Season Four, it is revealed that Malcolm Dreyfuss is planning to gather his own Four Horsemen of the Apocalypse, with Logan MacDonald his intended Horseman of Pestilence.

Logan MacDonald is a young socialite who appears to be taking orders from Malcolm Dreyfuss. He is portrayed by Robbie Kay, who was known for portraying Peter Pan in Once Upon a Time.

Logan goes to DC for a fan convention. An hour before the convention, he published a video on his Picagram account with a mystical virus for Malcolm Dreyfuss. As the other fans gathered crowd Logan, Ichabod and Diana agree that Logan's Internet diatribes are boring. As Molly defends Logan, Logan overhears her and comes over. He takes a selfie with her and then collapses. As Logan's assistants take him away, Ichabod sees Logan's arm glowing red. He is taken to the hospital. He was then lured to the den of a Djinn, which is a server farm, along with the other people affected by his video.

Later, the Witness Ichabod Crane along with his other team mates. They had followed Alex Norwood, who was effected to the den. Ichabod dons a pair of insulated gloves, rips free two electrical lines, and says that it's time to summon the lightning. The djinn comes at him, and Jake reaches for it. Alex runs up and knocks Jake aside, and Diana shoots the djinn. Distracted, Ichabod is able to electrocute it. everyone snaps out of the spell, and Jake and Alex confirm that they can't hear the djinn's voice anymore. Later, Logan goes to Dreyfuss Enterprises. Down in the basement, Malcolm says that he's their Patient Zero. Logan says that he can feel himself becoming something stronger, and Malcolm tells him to be patient for the others to arrive.

It is later revealed that Dreyfuss is planning to gather his own Four Horsemen of the Apocalypse, with Logan his intended Horseman of Pestilence.

Conquest did not appeared in season 2 as rumored, yet many fans suspected that Frank Irving, Luke Morales, Sheriff Leena Reyes, Nick Hawley, Katrina Crane or Benjamin Franklin could be the next Horseman. 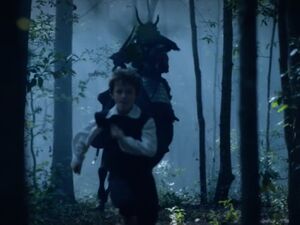 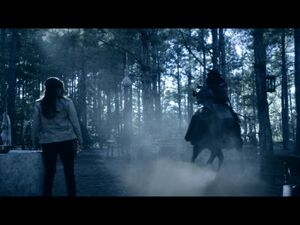 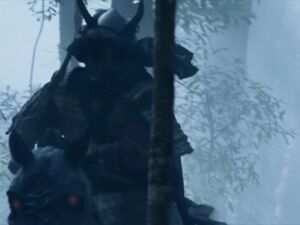