Help Izabella Scorpio find Hugo and use him in Izabella's next movie (failed).

Be rich by staring Hugo in a movie called "Beauty and The Pet" (failed).
Kill Hugo for leaving his film set (failed).

He was voiced by Flemming Quist Møller in the Danish version, and Mark Camacho in the English dubbed version.

Roles in the movies

Cupmann takes his wife Izabella Scorpio on a vacation to South America, presumably at her request, in search of a "super rare" pet to co-star in her personal film project, Beauty and the Pet. He hires a local wildlife tracker to help him catch Hugo, but shortly after returning to Izabella Hugo escapes their yacht. During the return trip Izabella learns Hugo is onboard the banana ship, and upon return to Copenhagen Cupmann and an unidentified aide break into the city zoo in an attempt to kidnap him. When news of Hugo's escape becomes public, Cupmann hires a group of bounty hunters in a bid to beat the police in tracking him down.

Cupmann appears disinterested in catching Hugo during the first film, going along with his wife's plan out of a sense of duty rather than personal enthusiasm. Indeed, his behavior onboard the yacht suggests he feels Izabella's fixation on obtaining an exotic pet is a waste of time, and after Hugo escapes them at the harbor he announces he's "through" with her and the search, and promptly departs in his car.

In the period between the first and second film, Cupmann divorces Izabella, but warms to the idea of creating a feature film to promote a line of consumer merchandise. He resurrects Beauty and the Pet with a new lead that he personally scouted, Miss Sensuella. Cupmann and his close staff fly to South America, where he has bought the section of jungle in which Hugo lives; he proceeds to clear-cut and then burn the area, trapping Hugo as the animals flee through a bottleneck. In order to circumvent customs, Cupmann paradrops Hugo directly into his film studio when his jet returns to Copenhagen.

Cupmann employs an animal psychologist in an attempt to tame Hugo, but the effort fails and the first shoot is a disaster; Cupmann then switches to positive/negative reinforcement, stating that Hugo will only be fed if he learns to obey. The second shoot is a smashing success, but on the third day Hugo breaks out of the studio and Cupmann deploys his security personnel to track him down, following Hugo and Rita by helicopter as they flee into the country woods.

Unable to raze the forest for fear of attracting police attention, Cupmann surrounds the area with chain-link fencing and posts a constant watch. When autumn arrives and the tree cover falls, his men move in; while he wants Hugo captured, he orders Rita killed, deeming her a "bad influence", and when Sensuella protests he promptly fires her. When the animals escape via a frozen river Cupmann gives pursuit on snowmobile and ambushes them under a road bridge. Before Cupmann can subdue Hugo the police arrive, having been tipped off by Sensuella. Hugo and Rita slip away in the ensuing confusion leaving Cuppman to be infected by the sleeping needle, Cupmann is presumably arrested for his villainous actions. 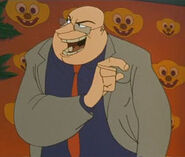 Conrad Cuppman as he appears in Hugo the Movie star.

Conrad Cuppman as he appears in Go, Hugo Go. 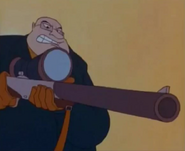 Conrad with his sniper rifle. 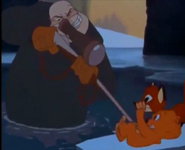