Connie (as a child)

Student (as a child)

Raider (as a teenager, formerly)
Mercenary (formerly)
Institute field operative (until his death)

Spending time with his family (formerly).

Working for the institute (formerly).
Smoking cigars.
Drinking beer.
Toying and practicing with his revolver.

To fulfill every job he is hired to deal with and collect profits
Specific objectives:
Protect his mother from his father with the gun she handed him (failed).
Working as a guard for the Shi (formerly).
Protect his family at all costs (failed).
Make money from taking contracts to kill people from his clients in order to provide for himself (formerly).
Escape from under "the thumb of the NCR and all their rules".
Stay as far away from San Francisco to forget his past and other bad memories.
Retaliate against the murderers of his family.
Be hired by the institute as their main assassin and be turned into a cyborg to extend his lifespan(all succeeded).
Wipe out everyone at University point along with his army of synths to obtain a fusion reactor on behalf of the institute (ongoing).
Obtain Shaun in vault 111 (succeeded).
Assassinate Virgil in the glowing sea along with his army of synths (failed).
Kill the sole survivor (eventually failed).

Conrad Kellogg is the secondary antagonist of Fallout 4. He was a Magnum-toting, cigar-chomping ruthless and highly skilled mercenary. contract killer trained and operated to kill people for a living and thereafter an Institute asset who does their bidding in the Commonwealth and is sent to obtain Shaun, the son of the protagonist, from Vault 111.

He was voiced by Keythe Farley.

Kellogg was born in the New California Republic, California in 2179, 108 years before the events of the game to an abusive father who was a frequent drunk and a loving but weak willed mother. On one day, his mother handed him a gun, stating that he was the man in the family and needed to protect them. However, Kellogg ran off, never finding out what happened to his mother. When he grew up he became a mercenary, moved to San Francisco got married to a woman named Sarah and had a daughter, Mary. This happiness was short lived as his family was murdered by enemies he had made in his line of work. Kellogg later regretted meeting Sarah, as she would have lived longer has she never met Kellogg.

After the death of his family he headed east, intending to get as far away from San Francisco as possible. Over time he found himself in The Commonwealth and was called to The Institute, which was annoyed that most of Kellogg's work went against them. At that time, the Institute was creating the first versions of their Synths. Kellogg followed the invitation out of curiosity. He however stated that he would do whatever he would be paid for and that the only way the Institute could stop him from sabotaging them was paying him. Kellogg's conversation partner refused and promptly ordered two Synths to kill the mercenary but was surprised when Kellogg hastily defeated both. Impressed, the Institute decided to employ Kellogg.

Kellogg succeeded with many jobs for the Institute and eventually became the Institute's main asset in the Commonwealth. In this position he eventually led a group of Institute scientists into Vault 111 in order to kidnap a baby named Shaun, who was in cryogenic stasis along with his parents and the rest of the vault. The scientists accompanying Kellogg defrosted the pods that contained Shaun and his parents and they proceed to open the pod. However, the parent carrying Shaun refused to give the boy to the scientists and is shot by Kellogg. Though he initially did not intend to kill the parent, Kellogg later decided that it would have been more merciful than stealing the boy and leaving the parent alive.

Eventually, Shaun's surviving parent is defrosted again and manages to hunt down Kellogg and confront him in Fort Hagen. After a short conversation a fight ensues, leading to Kellogg's death. Afterwards the parent takes the cybernetics that the Institute gave Kellogg in order to prolong his life in order to discover where their son is located by accessing his memories. 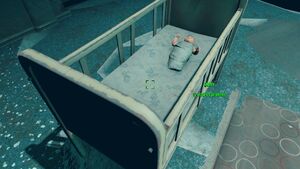 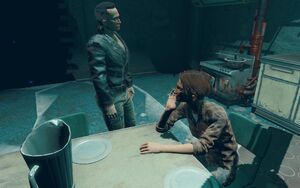 A young Kellogg with his wife Sarah. 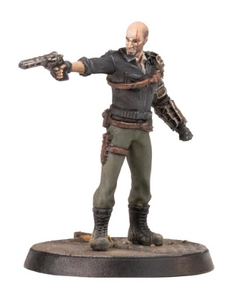 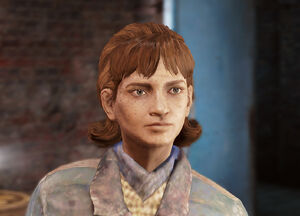 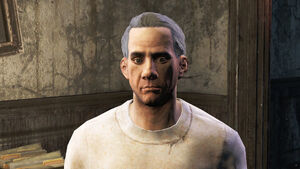 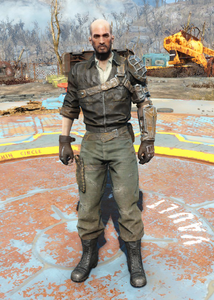 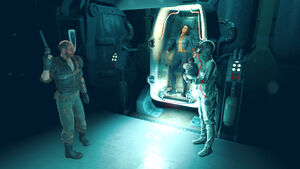 Kellogg after he shoots The Wanderer's spouse and lets an unknown scientist take Shaun.
Add a photo to this gallery

Retrieved from "https://villains.fandom.com/wiki/Conrad_Kellogg?oldid=4355763"
Community content is available under CC-BY-SA unless otherwise noted.