Collecting works of art and philosophy and even misanthropy.

Get revenge on both Barney Ross and The Expendables for his near-assassination years earlier (failed).

Conrad Stonebanks, formerly identified as Victor Menz, is the main antagonist of the 2014 live action film The Expendables 3.

He is Barney Ross' arch-nemesis, as well as his own former friend and a former SASR operative who was the co-founder of The Expendables.

He was portrayed by Mel Gibson, who also portrayed Luther Voz in Machete Kills.

Conrad Stonebanks was born on December 4, 1966 in New York City, United States. He was a former operative of the Australian Army's Special Air Service Regiment, and both Stonebanks and Barney Ross, along with three others, formed their mercenary team called The Expendables several years later. Stonebanks had a family; a wife named Kristina and an unnamed daughter.

When Barney discovered that Stonebanks started arms dealing business since he thought mercenary work was not profitable enough, he was forced to terminate him on orders from the U.S. government, which resulting in the deaths of three other founding members. However, since Stonebanks was wearing a heavy bulletproof vest, he survived the assassination plot.

For over two decades, Stonebanks was presumed dead until he resurfaced with his own team of highly advanced mercenaries to take down the Expendables he once helped create. At the same time, he vowed that he would no longer work with any foreign governments since he stated that they are untrustworthy after the U.S. government made Barney to kill him.

Stonebanks was seen delivering a shipment of aerosol bombs to the warlords in Somalia under the alias "Victor Menz". As he arrived at the meeting site by helicopter, both Doc and Ross were shocked to see that Stonebanks was still alive. Ross had thought he killed Stonebanks 20–25 years ago and he yelled Stonebanks' name in anger as The Expendables started firing at Stonebanks and his team, but Stonebanks was able to retreat by firing back at them. Stonebanks was then in the helicopter where he shot Hale Caesar in the leg and the back of the chest, wounding him very badly.

Stonebanks was then seen in his lair where he was talking to Albanian Mafia's leader, Goran Vata, in a firefight with The Expendables, with many of his men were killed and wounded. He was then captured by Ross in the van where Stonebanks explained the story of how Ross thought he killed him. Shortly afterwards, Stonebanks' bodyguard Krug suddenly intervened in a helicopter and shot down Ross' transit. Because of this, Stonebanks escaped once again and ended up kidnapping the younger Expendables whilst Ross had already been shot down into the river.

He later sent a personal video message to Barney Ross that showed him and the younger team who were tied to a wall surrounded by his mercenaries. He challenged Ross, telling him to come get them back. CIA officer Max Drummer told Barney Ross that they are in Asmenistan, a third world country where he trained his mercenaries. He also pointed out that Stonebanks had put no effort in hiding his location, wanting him to come get him.

When Ross arrived to the Asmenistanian compound with his original team and a new recruit named Galgo, Stonebanks watched via two-way video surveillance from a building not far from the compound. He revealed that the whole building was rigged with C4 explosives and would go off in 45 seconds. Thorn was able to block the detonation with 3 seconds left, however his device was at 8% and could no longer stop the detonation once it went dead. Stonebanks then dispatched the entire Asmenistan military to the compound (with tanks and helicopters) to execute them as a plan B. The two teams began a brief dispute, which Stonebanks had planned, but Barney convinced them to overcome their differences in order to fight their enemies.

In the end, The Expendables conquered victory after impressively battling waves of Stonebanks' army with the help of Drummer who arrived in his helicopter, alongside Trent "Trench" Mauser and former Expendables member Yin Yang. Applauded by this, Stonebanks killed two of his own men to demonstrate how easily it is "to kill ten men OR even would them". He then left in frustration to finish The Expendables himself, all of whom had already boarded Drummer's helicopter. Ross almost escaped until Stonebanks distracted him with his message before surprising and shooting Ross in the shoulder, wounding him in the process.

Having forced his opponent to remove the armor and weapons, Stonebanks engaged Ross in a one-on-one brawl after dropping his revolver. Both were equally matched until Ross gained the upper hand before the duo rushed for weapons. Stonebanks first managed to get the rifle and started shooting, but Ross got the better of him by shooting the treasonous founder five times in the chest. At his opponent's mercy and knowing his undeniable defeat, Stonebanks delivered his final taunt to Ross with his question, "What about The Hague, huh?". Ross fatally shot Stonebanks before coldly responding with his answer, "I am The Hague", and leaving Stonebanks' corpse to burn up as the explosives Stonebanks had planted went off around the building.

Conrad Stonebanks was a highly charismatic and ruthless psychopath who took a habit in expanding his war crimes; upon which he gained immense pleasure in antagonizing his old friend Barney Ross during their warpath. He also appeared to gain an interest in art and philosophy, albeit this was part of his agenda to further escalate his notorious reputation against Ross and The Expendables. He somewhat had a tendency to kill his own men so he can do the dirty work himself.

Being a former special forces soldier, Conrad Stonebanks was able to utilize various types of weapons to his own advantage, as seen when he used an assault rifle to accurately shoot Hale Caesar from the helicopter he was aboard.

Stonebanks was also trained in hand-to-hand combat, when he fought his old friend Barney Ross in their final confrontation before getting bested in combat by Barney in the process. He was somewhat an expert strategist, when he formed a plan to kill The Expendables using remote explosives in the abandoned building until he activated his backup plan; sending in the Azmenistan army, including battle tanks and helicopters, to attack The Expendables.

Stonebanks purchasing a painting he doesn't even like for $3 million

Stonebanks outside his home in Russia

Stonebanks waiting to do business with one of his clients

Stonebanks engaging in an arms deal with Goran Vata

Stonebanks talking to his old friend Barney Ross after being captured

Stonebanks speaking to Barney's apprentices while they are tied up

An injured Stonebanks making one last exchange with Barney following a fight. ("What about The Hague, huh?)

Stonebanks lies dead after being shot repeatedly in the chest by Barney. ("I am the Hague.") 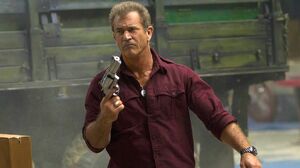 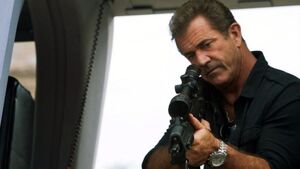 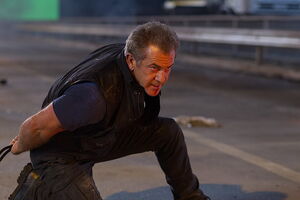 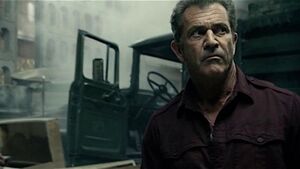