Each briefly had a power of one of the Meta-Nanites.

Become Gods and rule the world.

The Consortium are the main antagonistic faction of Generator Rex. They were a group of powerful individuals who are the cause of most if not all the events in the cartoon. The Consortium feared death to such a degree they were willing to fund a project with the brightest minds on the planet in return for them being granted what they most desired.

The Consortium before the start of the series funded the Nanite Project in return that the project make them immortals. After an accident happened to the main character Rex and saved by nanites the Consortium decided they could use nanites to do much more than to simply become immortal and demanded more research be done along with the research to become immortal. Eventually the scientists created five special nanites known as the Meta-Nanites that when used together granted absolute control of the universe but the scientists agreed the Consortium nor could anyone be trusted with such power so they released all the nanites in a blast across the world to prevent anyone from ever obtaining the Meta-Nanites. This however never stopped the Consortium as they funded a organization called Providence to not only to maintain EVO's but to find the Meta-Nanites for them so that they can become Gods. Eventually they replace White Knight with Black Knight who secretly plans to betray them and take the Meta-Nanites for herself. When she holds a meeting and gets largely ignored by most Black Knight killed one of the members by the name of Vostok, and eventually forces them to allow her to join them. After obtaining the Meta-Nanites they have them inserted into their bodies but Van Kleiss sabotaged it so they would only receive about one fifth of the power they desired. As a result the Consortium are turned into bio mechanical EVO's who first test out their powers by causing mayhem around the world. After a while unsatisfied with not having the full power they desired they fight Rex to let out their frustration before ultimately deciding to have the Meta-Nanites removed and re-inserted to become Gods despite knowing the risk they might die if something goes wrong. In the end Van Kleiss betrays them so that he can take the Meta-Nanites only to be wounded due to only Rex being able to have all them at their full power due to a unforeseen programming made by Rex's parents. Ultimately the Consortium escape capture and retreat not long before Rex does a global cure that cures all EVO's on the planet.

The Consortium primary goal was to at first merely to become immortal but after learning of the full potential of nanites they decided that would no longer be enough wanting nothing less than to have complete control of the world and to become Gods. 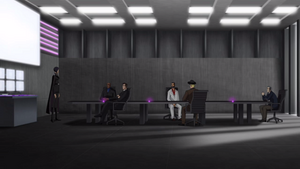 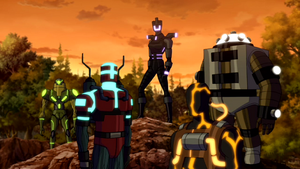