Kill all unfaithful men she comes across (succeeded; failed with Sam Winchester).

Constance Welch, also known as The Woman in White, is the main antagonist of the pilot episode of Supernatural.

She was played by Sarah Shahi in season 1 and Shanae Tomasevich in season 14/15.

In 1981, Constance drowned after she jumped off Sylvania Bridge near the Centennial Highway in Jericho, California. An hour previously, she had called 911 and reported that her two children drowned in the bath after she briefly left them unattended. In reality, she went insane and drowned her children after finding out her husband had been unfaithful.

Since her death, she haunted the highway, appearing as a hitchhiker to young men. Constance would beg to be "taken home," but then protest that "she could never go home." She would then kill the young men after she tempted them into being unfaithful. Ten men died on the same five mile stretch of highway before Dean and Sam stopped her. 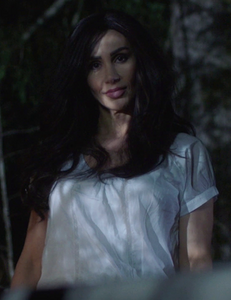