Constantine Drakon is a villain from the DC Comics and and enemy of the Green Arrow. He is an assassin who kills mainly for his own enjoyment but does so in a very well-mannered, professional manner.

Although his exact height has not been given, the Greek assassin Constantine Drakon is a short individual. As a child he was teased for this by other children.

Once he started killing people at the age of ten, however, he found he was no longer sensitive about his stature. He claims that he had nothing strange or traumatic in his upbringing to turn him to murder, he was simply curious to see what he could do.

Discovering that he was a prodigy at killing, Constantine proceeded to make a living out of it. He considers what he does not just a job but a vocation, and takes pride out of the businesslike manner in which he operates.

Constantine Drakon is an antagonist appearing in first episode of Season 1 of Arrow and was Adam Hunt's replacement head of security.

He was portrayed by the late Darren Shahlavi. 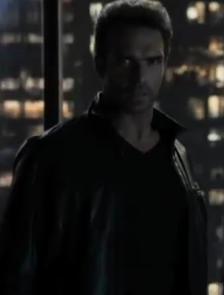 Constantine Drakon appearing on Arrow.
Add a photo to this gallery

Retrieved from "https://villains.fandom.com/wiki/Constantine_Drakon?oldid=3526314"
Community content is available under CC-BY-SA unless otherwise noted.