The Constructicons appeared in the cartoon series Transformers Animated. They are shown as construction vehicles brought to life by Allspark fragments. Unlike their G1 counterparts, the Constructicons do not combine into Devastator and are not official Decepticons at first, as they are only bribed into their service.  Prior to becoming green and purple, the Constructicons had a black and yellow color scheme, similar to that of their G2 depiction and are formerly known as "Constructobots". Their personalities resembles that of New York construction workers, with Brooklyn accents. They are shown to be fond of oil and red sports cars.

First debuting in "Rise of the Constructicons", they Constructicons were unintentionally created by Bulkhead using AllSpark fragments on nearby construction vehicles. After he accidently hit a crane, nearly being crushed by its load, Scrapper & Mixmaster arrived & saved him. They befriended him, while naming the two after several names they could find, and were invited to the Autobot headquarters. However, they were kicked out by Optimus Prime due to their clumsy behavior, which nearly decapitated Sari Sumdac like a doll. The Autobots then grew suspicious of them and started to warn Bulkhead.

After leaving, the Constructicons then met with Lugnut and Blitzwing, who were stealing construction supplies and saved the latter two from being crushed by the materials. Impressed, Blitzwing though of letting them do the heavy work and then shutting them down once they arrived at Decepticon headquarters. Megatron then discovered about this and had decided to use them to build a space bridge for him, which the two had no problem with.

The Constructicons then began stealing construction supplies for the space bridge, only to be confronted by Bulkhead, whom they told of their new job. Enraged, Bulkhead scolded them & told them about who the Decepticons are. They soon confronted Megatron, knowing they are tricked. The Decepticon leader however, charismatically introduced his "private blend" of oil, as well as claiming he is a "hero" with the Autobots as "bad guys" & giving them the title "Constructicons" & asking them which to side. Confused, they Constructicons decided to side with the one with the best oil.

They went back to the Autobot headquarters to steal the AllSpark cube, fighting the Autobots and even taking Bumblebee as a hostage. Bulkhead then allows them to take the Allspark in exchange for Bumblebee's life, as well as giving them some oil before leaving. As they left the Autobot headquarters, they fell dizzy and exploded, revealing that the oil they drank was contaminated, frying their memory chips in the process. The Constructicons then forgot who they are. Frightened by the Autobots, they are forced to leave as Bulkhead watches sadly. 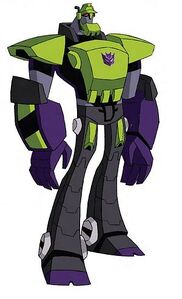 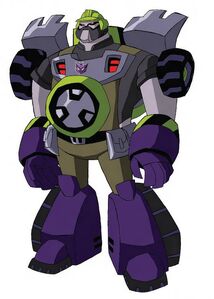 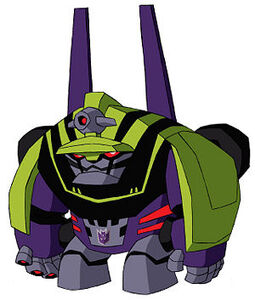