Wolverine: The Best There Is

Supervillain
Leader and founder of the Unkillables

Develop a virus to wipe out all existence, even in the afterlife (failed).

Winsor, better known as Contagion, is an antagonist in Marvel Comics, being an enemy of Wolverine. He was the founder and leader of the Unkillables, and is unique in being particularly vile across many minor antagonists in Marvel Comics.

He was created by Charlie Huston and Juan Jose Ryp.

Contagion was an extremely depraved and evil villain even by the standards of comic book fiction, going as far as torturing his own son via infecting him with a strange disease that horribly mutated him, forcing Wolverine into a series of horrific tests to find a "cure", yet in reality he had no intention of curing his son and wanted to watch his head literally explode (having hated his "mistress" for birthing a son he never wanted, finding the idea of having a child with someone not related to himself unnatural).

If this was not bad enough Contagion experimented on many, many beings across time and space, seeking to perfect a virus that would wipe out all life, making him a would-be-universal destroyer far worse than even Thanos, since he took a perverse fascination in agonizing ways to mutate and harm others, needless to say he was among the most brutal and dangerous modern threats Wolverine faced and had to be cannibalized by Wolverine and a group of other "unkillable" mutants just to stop his rampage, since even a single piece of his body could produce volatile plague on an apocalyptic level.

Contagion is a walking factory of unimaginable plague and suffering, his body fluids alone were packed with every known disease and affliction on Earth as well as a great many exotic and horrific diseases of his own creation: his power was so tremendous it was stated he could create any affliction his twisted imagination could fully conceptualize.

He also made extensive use of technonecrotic virus, made via manipulating Technarch DNA, infecting organic and inorganic hosts, turning them into unliving zombie-like beings that would pass on the infection to others.

He also had superhuman-strength, invisibility, invulnerability, a healing factor rivaling Wolverine and great knowledge of computers and technology.

Finally, he had a rocket-launcher cane, which he used frequently in battle as a trademark weapon of choice. 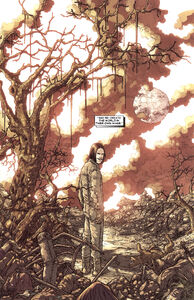 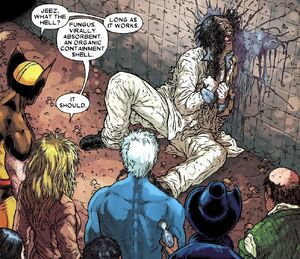