Lord of Chaos (as Adonis)

Contorno (also known as Jerry) is an antagonist from The Ren & Stimpy Show who only appeared in the twelfth episode of the third season named "Jerry the Bellybutton Elf". He is a giant one-eyed porkchop monster who started off as a little green one-eyed creature known as Jerry the Belly Button Elf and lives in Stimpy's belly button.

He was voiced by Gilbert Gottfried who also voiced Iago in Disney's Aladdin, Berkeley Beetle in Thumbelina, Kraang Subprime in Teenage Mutant Ninja Turtles, Mister Mxyzptlk in Superman: The Animated Series, and Dr. Bender in The Fairly OddParents.

In his disguised form, he is a one-eyed elf with aqua-green skin and almost the same height as Stimpy. He also wears a hat and a kind of tutu made out of lint. In his true form however, he is actually a giant one-eyed porkchop monster with sharp teeth, muscles and considerable height.

One day he calls out to Stimpy to come join him inside his bellybutton which he does by turning himself inside out and he leaves his bellybutton behind. He and Stimpy are pretty good friends at first and he has Stimpy do chores in his lint palace.

Eventually he calls Stimpy to make him dinner which is lint loaf. He declares that he hates lint loaf. He goes insane and tries to kill Stimpy using a spiked club and later trying to run over him with a motorcycle. While he fails in the two attempts, eventually Jerry corners him and Stimpy thinks he is acting out because he hasn't had dinner and that he could heat up the lint loaf.

When Jerry hears this it makes him even madder. He rips off his disguise and reveals himself as the giant porkchop monster named Contorno and declares that he will eat Stimpy. Stimpy calls for help within the bellybutton and Ren who is hosting a party answers. He drags Ren inside with Stimpy and he eats them both. Muddy Mudskipper's obese wife takes the bellybutton and eats it presumably killing him and Ren and Stimpy had probably got out by then. 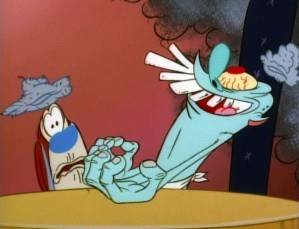 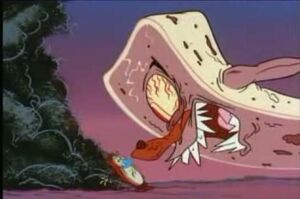 Retrieved from "https://villains.fandom.com/wiki/Contorno?oldid=3927620"
Community content is available under CC-BY-SA unless otherwise noted.